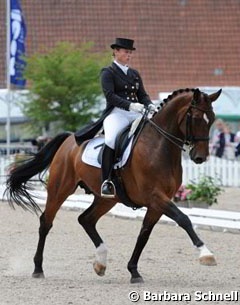 Based on the performances of the riders at the 2011 German Dressage Championships in Balve, the German Equestrian Federation announced the team that will represent German at the 2011 CDIO Aachen taking place 14 - 17 July 2011.

A reserve combination has not been named (yet).

"From the perspective of the entire committee, I can only say that for three days we have seen super sport on a fantastically high level here in Balve," Röser commented.

The 2011 CDIO Aachen is promising to be a "Mini-World Equestrian Games" and the biggest battle of top horses before the 2012 Olympic Games as American pair Steffen Peters and Ravel are entered to compete. They will be facing Totilas (Rath), Mistral Hojris (Bechtolsheimer) and Cornelissen (Parzival) in Aachen!