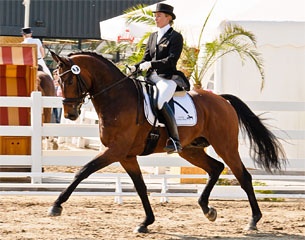 Three U.S. based horses also earned their qualification score for the World Championships via one of the three U.S. young horse selection trials. Emily Wagner's 6-year old Wakeup had the "lowest" qualification of the three 6-year olds which ruled him out as only two horses per age division can be nominated. The owners and riders of the 5-year olds Sanceo and Somer Hit declined the financial burden to go to Verden and opted to stay home and prepare for the 2011 U.S. Young Horse Championships.

The U.S will be represented in Verden by:

"I got both horses after I came to Germany in December 2010," Jennifer Hoffmann told Eurodressage. "Both horses are currently going exceptional well and have been receiving some 9's on their single marks. Florentinus and I have also qualified for the Bundeschampionte in September. He has an amazing elasticity, which made many people comment, that it looks like he dances through his tests. His lightness and suppleness are truly one of a kind. Ratzinger is a very powerful and active mover, with a very calm and steady mentallity."

Hoffmann recently relocated from California back to her native country Germany, where she and her husband Jurgen are now head trainers at Gestut Letter Berg in Coesfeld.

Also earning a qualifying score in Europe were Allison Brock and Schumacher (by Stedinger x Weltmeyer) with a score of 9.0. Brock and the Westfalian gelding, who won bronze under Claudia Ruscher at the 2010 World Young Horse Championships and who is now owned by Fritz and Claudine Kundrun, have opted to compete at the 6-year-old International British Young Horse Championships at Hickstead instead of Verden.

"The number of horses that qualified this year was a true testament to the Markel/USEF Young Horse Program," said USEF Young Horse Coach Scott
Hassler.  "We had impressive horses come from all areas of the country
with many competing overseas and doing quite well against top quality
horses. The Young Horse Program is progressing in the U.S. just the way
we hoped it would."