Judging Supervisory Panel at Work at the 2011 World Cup Finals 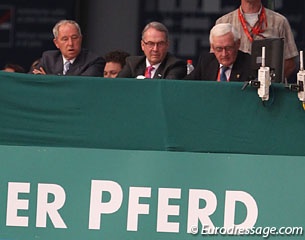 The FEI Judges Supervisory Panel (JSP), which was introduced at the start of 2011 having been trialled at the Aachen CHIO in July last year, made its first official appearance in the Grand Prix at the 2011 World Cup™ Dressage Final in Leipzig on 28 April 2011.

The JSP reviewed the scores for yesterday’s Grand Prix class and made revisions to the marks of four horses:

The members of the JSP in Leipzig are David Hunt, Eric Lette and Uwe Mechlem.
The breakdown of judges’ marks for all tests are available online here. Click on the final percentage for the full breakdown.

The Judges Supervisory Panel (JSP) has been introduced for defined events such as the Olympic Games, FEI World Equestrian Games™, FEI Continental Championships at Grand Prix level as well as FEI World Cup™ Finals. The JSP is allowed to correct the judges’ marks for factual errors, such as definite technical mistakes. One of the benefits of the JSP is to provide a “back-up” for the judges in order to protect both judges and athletes by preventing unfair marks.

Apart from supervising at events, the JSP should evaluate the quality of judges in general, make a proposal for assessment of judges and their status (promotion), provide a “long list” proposal of judges (for the Olympic Games, FEI World Equestrian Games™, Continental Championships at Grand Prix level, World Cup Finals) and a general overview of the “judges’ world” to the FEI Dressage Committee and FEI Headquarters, as described in the Dressage Task Force Report.