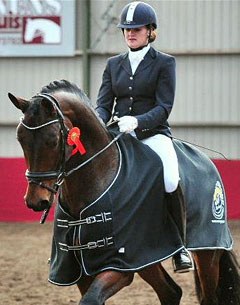 Borencio and Corleone were the winners of the 2011 Horsefood Dressage Talent competition for 4 and 5 year olds held at Berkel-Enschot on 19 and 20 March 2011. Judged by Jan Wolfs, Edward Gal and Hans Peter Minderhoud, more than 140 horses qualified for the finals of this rising Dutch winter competition for young dressage horses, which held its sixth edition so far.

The judges' trio assessed all youngsters under their own rider and the top three ranked horses were test-ridden by Hans Peter Minderhoud to determine the overall champion.

The 4-year old Corleone (by Lord Leatherdale x Lamoureux II x Der Clou) has only been saddle broken six months ago but rose to the top of the ranking under 19-tear old Danique Janssen from Prinsenbeek, The Netherlands, scoring 81.5 points in the first round. Guest judge rider Minderhoud was extremely enthusiastic about this young stallion, who got 95 points for rideability and potential totalling 176,50 points. "Of course he still has to gain strength but he was very rideable and quick from behind. I had a wonderful ride on him."

In the 5-year old division last year's Horsefood Dressage Talent winner Borencio recaptured the title. The Florencio x Lord Sinclair x Clavecimbel offspring, which is owned by Leida and Tim Collins, scored 85 points in the first round under Emmelie Scholtens. Minderhoud added another 95 points to that after his ride, which added up to a total of 180 points. "Borencio works with you and I was able to really try him out," Minderhoud told Dutch equestrian newspaper Het Sportpaard. "He doesn't appear to be very sensitive but he is when you're aboard. You can notice he's already far in his training."