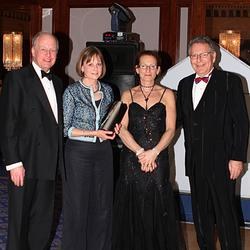 The former category was hotly contested and as both horses made an equally astounding contribution to the sport last year the award went to both Dr Jacqueline Walker, owner of Pinocchio and the Bechtolsheimer family, owners of Mistral Hojris.

Pinocchio and 20 year old rider Sophie Wells made history in 2010 as Sophie became the first ever para-equestrian rider to cross over and represent Great Britain on both the para-equestrian and the able bodied young rider team. Sophie took the ride on the 14 year old Dutch gelding two years ago and the pair have been unstoppable since, bringing home two gold medals in the grade IV individual and grade IV freestyle classes at the 2010 World Equestrian Games, Kentucky.

Jacqueline has owned the chestnut gelding by Landeur since a five year old and commented on the partnership between the pair, “Sophie’s really quite inspirational, a hardworking girl and totally dedicated to the sport. Sophie is quite small and Pinocchio is a big horse, but they just instantly clicked and really hit the spot. They are an amazing combination and I’m immensely proud of them both. It’s an amazing feeling to receive such an award.”

2009 winners Dr Wilfried and Ursula Bechtolsheimer also enjoyed an incredible year in 2010 as Mistral Hojris, the 16 year old Danish-bred gelding they co-own with daughter Laura secured a silver medal hat trick at the 2010 World Equestrian Games. ‘Alf’ as Mistral Hojris is affectionately known was instrumental to Laura’s success in 2010 as the 26 year old earned the title of the most successful British dressage rider ever and the pair raced up the FEI Individual World Rankings into third place. During the World Equestrian Games Laura and Alf smashed three personal best records across individual, team and grand prix freestyle classes and made history again in December as the pair became the first British combination to win the grand prix at Olympia CDI-W with an astonishing personal best score of 82.93%.

The Owners of the Horse with the Highest Percentage at the 2010 Petplan Equine Area Festivals award went to Janine Jansen, owner and rider of nine year old Dutch-bred mare Velocity IV. The talented combination enjoyed a winning streak in 2010, in April they won the novice open and the elementary open Petplan Equine Area Festival Championships, with 72.59% and 70.74% respectively.

The Intermediate eventer and the BBC South West presenter then went on to qualify for Gatcombe Horse Trails at Novice and Intermediate, they won the South West Regional and finished their season by becoming elementary restricted champions at the National Dressage Championships with 70%.

British Dressage Chief Executive Amanda Bond commented on the awards, “Without owners there would be no horses, and therefore we would have no sport. Our success over recent years has been totally reliant on the generosity and support of so many owners, so I am thrilled that we are able to show recognition to them through the Shearwater awards.”