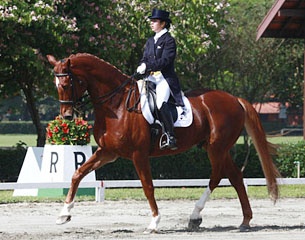 Victoria Riskalla has been selected as Brasilian representative for the 2010 FEI Young Riders World Cup Final, hosted at the 2010 CDI-W Frankfurt on 15 - 17 December 2010. The 21-year old will ride the 17-year old Dutch warmblood Large Times.

Riskalla and her chestnut gelding (by Good Times x Furioso) were the 2009 and 2010 Brazilian young rider's champion and are currently in Germany training with Norbert van Laak in preparation of the World Cup Final.

Victoria received a wild card for the competition as the South American representative.

This is the second time that a Brazilian rider is competing at this prestigious event for Young Riders. Five years ago her brother Rodolpho won the consolation finals at the 2005 Young Riders World Cup Final.

Riskalla will stay in Germany for three months in total to gain valuable experience and exposure in Europe.