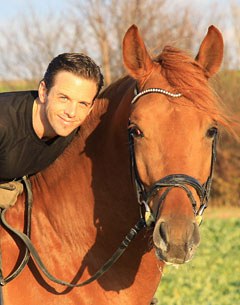 As of February 2011 Austrian dressage rider Christoph Wutti will be assisting head rider Johan Svensson with the training of the Gestut Wiesenhof horses. Wutti worked at the Spanish Riding School and used to a rider at Jerich Stables in Austria. Aboard the chestnut stallion Oro Divino (by Manhattan x Parforce) he came 2010 Bavarian Trakehner Champion.

The German government supports its high performance athletes of all disciplines. For 2011 the goverment has made available almost 133 million euro to support German top sport athletes in their preparation for the 2012 Olympic Games.

We only heard it recently but apparently he sold already a year ago, arriving at his new farm in January 2010. The Canadian "Dreamscape Farm" acquired the 5-year old licensed Oldenburg stallion Sir Gregory (by Sir Donerhall x Don Gregory x Picasso). The chestnut stallion won the 30-day stallion performance test in Neustadt/Dosse.

Oliver Luze and his wife Katrin have found a new base at Gestut Fohlenhof in Hassloch, Germany. Luze previously rented boxes at Helenenhof, where he also rode the Grand Prix stallion Carabas. Owned by the Heicke family, Gestut Fohlenhof used to be a Thoroughbred farm. Luze will be training young horses at this farm.

Dressage so Klart reported that Norwegian WEG team rider Ellen Birgitte Farbrot has began a new job at Følle Strandgaard in Denmark. As of 1 December 2010 Farbrot will be preparing ponies for shows and licensings as well as train them under saddle. Ellen Birgitte was previously working at Priess Stutteri in Mors, Denmark.

Three weeks after launching its iPhone app for Equine Prohibited Substances, the FEI has today announced that the app is now available on Android smartphones. The official FEI Android version is available from today on Android phones with the version 2.2 (or later) operating system and can be downloaded from the Google Android Market, using your Android smartphone. The official FEI iPhone app is available for download from the iTunes Store.