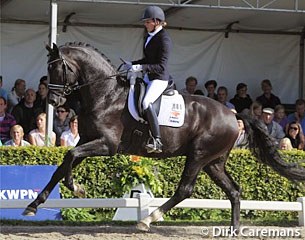 Eleven stallions in total passed the testing which had its final day on 24 November 2010 in Stegeren, The Netherlands.

Bred by G. Jansen-Blanken and owned by Nico Witte and A. van Limpt, the black Bretton Woods scored a total of 84.5 points. He received 7.5 for walk, 8.5 for trot, 9 for canter, 8.5 for suppleness, 9 for self carriage, 8 for rideability/character and 9 for dressage potential. Bretton Woods is by Johnson out of Annabel (by De Niro x Romancier x Troublemaker).

The second highest scoring dressage stallion was Cupido (by Daddy Cool x Jazz x Ulft), bred and owned by F. van Stiphout. He scored 8.5 for walk and canter and solid 8s for trot, suppleness, self carriage, rideability/character and dressage potential. He totalled 82 points.

Jan Lamers' bay stallion Cachet L (by Jazz x Ferro x Nimmerdor) ranked third with 81.5 points. The stallion scored 8s for walk, trot, suppleness,  self carriage and dressage potential, a 9 for canter and a 7.5 for rideability and character.

President stables' Chagall (by Jazz x De Niro x Romancier) finished fourth with 80 points. He got 7.5 for walk, trot and rideability, 8 for suppleness and dressage potential, 8.5 for self carriage and 9 for canter.

The Vivaldi x San Remo did not pass the testing as he only scored 68 points.