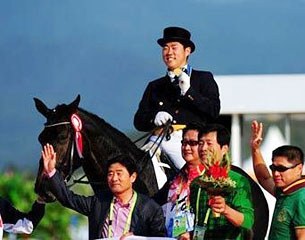 Korean Hwang Young Shik  won the gold medal in the individual dressage competition at the 16th Asian Games  at the Guangzhou Equestrian Stadium in China on 17 November 2010. Aboard Laura, Hwang was the undefeated champion winning the Intermediaire I (71.368%) and Inter I Kur to Music (74.900%) to earn the gold.

On his Asian Games' debut, the 20-year old Hwang was the only rider to score above 70% in both individual rounds. At the show he was assisted by Korean coach Shin Chang-Moo.

The silver and bronze went to two Malaysian riders, who are sister and brother. Trained by Danish Olympian Andreas Helgstrand, Quzandria Nur Mahamad Fathil steered the chestnut Danish warmblood gelding Handsome to the silver medal. Quzandria used to train in The Netherlands but has switched coaching when she got the ride on Handsome (by Hertug x Schwedengruss) who was previously campaigned by the late Holger Sorensen at the 2007 World Young Horse Championships.

"We always compete against each other in any competition. He is my biggest opponent," Quzandria Nur commented. "I am happy that I won this time. Although I aimed for the gold medal, luck was not my side. The silver medal was also great."

For the second consecutive time at the Asian Games, South Korea won team gold. With an average of 65.759 points the Korean team placed first in Guangzhou on Sunday. For the 2010 Asian Games the Korean team consisted of Choi Jun-Sang, Kim Kyun-Sub, Kim Dong-Seon and Hwang Young-Shik and beat the Chinese into second place by a margin of 0.166 percentage points. Malaysia took bronze with 65.111% while Japan missed a podium spot by finishing on 64.759%.

Korean team rider Choi, who was the 2006 Asian Games' individual gold medallist, won his third straight gold in team dressage and his fifth Asian Games' gold. Korean team member Kim Kyun-Sub dedicated the victorya to his uncle Kim Hyung-Chil, who was killed during the eventing competition at the 2006 Asian Games in Doha. "I hoped I could win gold in dressage to honour my uncle. I trembled before I came into the arena," Kim told AFP.

India’s sports ministry has denied permission to the equestrian squad to take part in the Asian Games after China refused to allow their horses in due to strict quarantine laws. India had proposed to send eight horses to the Games, but the government backed out after Chinese authorities cleared just three for the trip to Guangzhou.

After the Games the Guangzhou Equestrian Stadium will be used as an equestrian training centre according to a memorandum signed between the Hong Kong Jockey Club and the Guangzhou government.