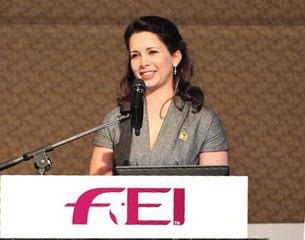 HRH Princess Haya Al Hussein (JOR) was today re-elected as President of the FEI at the Federation’s General Assembly in Taipei in a landslide victory in the first round of voting. Princess Haya, who was seeking a second and final four-year term as President, won with 90 votes of a total 124 valid ballots.

HRH Princess Haya was accorded a standing ovation as she returned to the stage after the election to address the electorate. “Thank you so much for your confidence and trust. I promise that I won’t let you down”, an emotional HRH Princess Haya commented.

“I promise to unify this Federation. I promise to work for you, the National Federations, and constantly appreciate your needs and do everything I can to serve this sport we all love. I never really realised how many wonderful friends and supporters I have. This has been a really extraordinary year for me and I am truly humbled by what you have done for me. Thank you very much."

HRH Princess Haya has been elected for a further four years until 2014.

Biographical details:
HRH Princess Haya Al Hussein (JOR) is the daughter of the late King Hussein of Jordan and wife of HH Sheikh Mohammed Bin Rashid Al Maktoum, Vice President and Prime Minister of the UAE and Ruler of Dubai.

HRH Princess Haya has been riding internationally since the age of 13. In 1992 she won the individual bronze medal in Jumping at the seventh Pan Arab Games and the following year was elected Jordan’s athlete of the year.

After years of intensive training in Ireland and Germany, she qualified for and took part in the Games of the XXVII Olympiad in Sydney in 2000, followed by her participation in the 2002 FEI World Equestrian Games at Jerez de la Frontera (ESP). She has represented Jordan at the FEI General Assembly on several occasions.

HRH Princess Haya became a member of the International Olympic Committee in 2007 and was this year appointed to the IOC International Relations Committee. She is also a member of the IOC Athletes’ and Culture and Olympic Education Commissions and is president and founder of the International Jordanian Athletes Cultural Association. She is the first Arab and first woman ever to become Goodwill Ambassador for the United Nations World Food Programme. In 2007 she was appointed as a UN Messenger of Peace by UN Secretary General Ban Ki-moon.