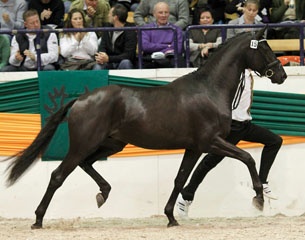 The Danish bred black stallion Imhotep has been proclaimed champion of the 2010 Trakehner Stallion Licensing in Neumunster, Germany, on Saturday 30 October 2010. The black Gribaldi x Hohenstein x Schwadroneur was the favourite of the public and stallion committee.

Bred by Belinda Pedersen and Preben Rasmussen and owned by Lene and Henrik Nielsen, Imhotep was presented at the licensing by dressage rider Hans Jørgen Hoeck and sold at auction for 300,000 euro to Nordrhine-Westphalia.

"This is a licensing stallion which sets hearts aflutter," said breeding director Lars Gehrmann, "Imhotep has an extraordinary expression, is always very pure in rhythm and with every appearance he was highly motivated."

In 2008 Imhotep was the Danish Trakehner Colt of the Year and was then named "Imhotep of Highmoor".

The reserve licensing champion was His Time (by Interconti x Timber), bred by Gisela Gunia and owned by Gut Panker. "This stallion never showed a weakness. He never failed in rhythm, has a sportive movement mechanism and showed much intelligence over the fences," said Gehrmann. This bay stallion was acquired by Landgestut Marbach and Klosterhof Medingen for 180,000 euro.

The third placed stallion was Millennium (by Easy Game x Ravel), bred by Bettina Bieschewski and owned by Gestüt Hohenschmark, Grebin). This dark bay stallion was acquired by Gestut Sprehe in partnershop with the Saxonian State Stud in Moritzberg for 320,000 euro.

The best show jumper was premium licensed colt Tarison (by Hirtentanz x Humanus) which sold at auction for 59,000 euro.

Thirteen stallions in total were licensed. Six made it into the premium ring. The other two premium stallions were Mescalero (by Impetus x Herzzauber x Mandant) owned by Dagobert Vester and Banderas (by Le Rouge x Friedensfurst x Diamant) owned by Heinrich Ramsbrock.