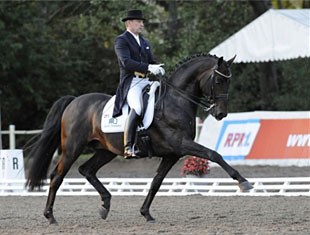 Oliver and his wife Katrin Luze left their long time employer Gestut Tannenhof in December 2008 to rent stalls at Schwiebert's farm. At that time Tannenhof's Grand Prix horse Carabas (by Carnaby) had sold to Andreas Helgstrand. Oliver had won the 2008 Medien Cup Finals with him and the horse became a very attractive sales horse. In 2010 Schwiebert acquired Carabas from Helgstrand and gave the dark bay stallion back to Oliver to train and compete.

Today German equestrian magazine Reiter Revue reported on Luze's departure. "We didn't have an argument and we were the best of friends," Luze told to the magazine. "I did however urge for Carabas to have a long show break as of August, but that was all we disagreed about. After the show in Verden I had the feeling that the stallion needed rest." Schwiebert told Reiter Revue that he was not available for comment. "It just no longer worked with Oliver Luze," he said.

It is uncertain who will be competing the 12-year old stallion in the future. The rumour that Spanish Beatriz Ferrer-Salat is interested in the horse was debunked by Schwiebert. "This year nothing will happen with him. I'll be riding him and he's being lunged."