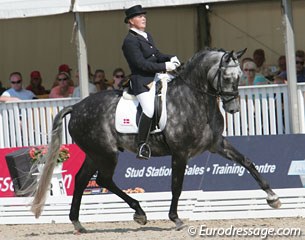 The dapple grey gelding by Heslegards Rubin x Heslegards Louis will be a successor for Pujals' top horse Vincent, which passed away in May 2010.

"We're really happy that Bernadette will be riding him," Lone Madsen told Ridehesten.com. "We're sure that he'll be in good hands and we look forward to following him in the future."

Trained by Jonny Hilberath, Mexican Bernadette Pujals was the shooting star of the 2006 World Equestrian Games. Aboard the chestnut Hanoverian stallion Vincent she came out of nowhere and finished 10th in the Kur to Music Finals. Vincent died unexpectedly in May.