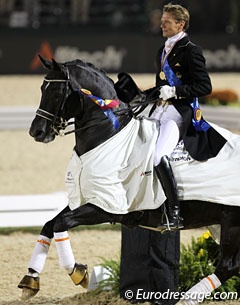 FEI Press Release -- The brightest stars in the sport of dressage sparkled again tonight as The Netherlands' Edward Gal and the amazing black stallion Moorlands Totilas claimed their third gold medal of the week in the Grand Prix Freestyle at the 2010 World Equestrian Games™ in Kentucky, USA. On Tuesday they joined their Dutch counterparts to scoop the team title, on Wednesday they topped the Grand Prix Special and tonight they made it a hat-trick when taking centre-stage on the Freestyle podium.

They've broken so many records over the last year that another came as no surprise - they are now the first partnership ever to win three World titles at a single Championship, but the Dutch duo didn't steal all the limelight on this extraordinary evening.

Tonight's silver medallist Laura Bechtolsheimer, produced a personal best score of 85.35 with Mistral Hojris to become the first ever British rider to take three medals at a World Dressage Championship - in the Team, Special and Freestyle. It's been a sensational week for the 25 year old. And tonight's bronze medallist, Steffen Peters, "put the icing on the cake" as he said himself, when topping up the record he set on Wednesday when he became the first American to win an individual Championship medal in Dressage in the 78 years since Colonel Hiram Tottle and his horse, Olympic, took bronze at the Los Angeles Olympic Games in 1932.

The Freestyle was always going to be all about Gal and Totilas who have raised the bar so high in this sport that they have become almost untouchable. But Bechtolsheimer set a strong standard when producing great trot extension, lovely passage, and pleasing piaffe with her 15 year old gelding to begin the final-five showdown with a score of 85.35. "My horse has found Freestyle difficult, but thankfully he concentrated enough to stay with me tonight. We made little mistakes in the two-time changes and a little in piaffe, but he showed his true colours and just picked it up again afterwards. I"m very proud of my horse" she said.

And then the arena was set alight with a spectacular performance from the Spanish partnership of Juan Manuel Munoz Diaz and the stallion Fuego. The crowd had fallen in love with them earlier in the week, so they were already particular favourites, but no-one could have expected them to produce the form they found tonight. Prancing into the ring with his knees almost touching his nose, the grey stallion demanded maximum attention. But just before the Spanish pair were to go before the judges, Diaz stopped to settle himself and Fuego joined in, leaning down to scratch his nose on his foreleg, leaving spectators a little bemused. Smiles turned to gasps of delight however as they stormed into the routine set to their Spanish soundtrack, and there were spontaneous cheers during Fuego's first extended trot. There was lots more to come however, including one-handed one-tempi changes, and by the time Diaz steered his horse up the centre line - in passage and once again using only one hand - there was near-hysteria around the ring. The showman Diaz couldn't contain his excitement at the halt, but very nearly parted company with his horse who shot forward as the Spaniard whipped off his hat and thumped the air with his fist in delight. The crowd went wild, and voiced their disapproval when this partnership were awarded 81.450 which they thought wasn't nearly enough, but it was a spectacular score and well deserved. 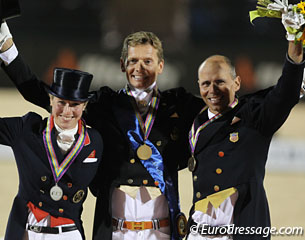 Next to go, Gal delayed his entry into the ring in order to let the noise settle down, and as he began his test with the horse which has already become a legend in such a short time, a hush descended around the packed stadium. "This arena is impressive, there was no-one at all here when we were practicing yesterday but so many people today - although we all had to deal with it" he said, referring to the electric atmosphere which prevailed all evening. Totilas broke in his first passage and then burst into canter during his first extended trot, but soon he was in that mesmerising rhythm, building up his performance and registering big scores. All five judges put him firmly first and when the scoreboard showed 91.800 it was clear the gold was already gone.

Peters had the unenviable task of following him into the ring but Ravel didn't let him down. Quietly and calmly they made their way through their routine with lovely half-pass and extended trot and with a score of 84.850 slotted into bronze medal position behind Bechtolsheimer. All that remained now was to see if, last to go, Holland's Imke Schellekens-Bartels could change the medal-order, and although Hunter Douglas Sunrise showed her customary bounce and exuberance it wasn't enough to squeeze onto the podium when 82.10 flashed up on the board.

Gal praised the people behind him including Nicole Werner and Hans Peter Minderhoud. "We work as a team, and we're doing a great job, but a horse like Totilas helps a lot!" he admitted. He said that knowledge of his horse was key to their success. "You have to be good to a horse and to have fun with him, to respect him. We are horse people who know what's good for a horse and what's not good, and that's important" he added.

Asked if he was relieved after the big build-up to tonight's performance he said "when I came in (to the ring) I knew I could do it but I had to make it happen. At the end I have three gold medals, it's so fantastic to come here and win all the tests, it's just sinking in a little bit now" he pointed out.

Commentator Brian O'Connor congratulated the new champion. "You have taken the sport of dressage in a whole new direction, you are the Master and Commander, and we thank you for what you have done. We don't know where this journey is going but we thank you for taking us with you on this magnficant tour" he said, voicing the thoughts of many.

Ground Jury President Linda Zang put it into perspective. "Tonight we were judging three completely different horses, Totilas has so much power but is easy and light and Edward does a great job to keep him in frame and to work happily with him. Laura's horse is big and powerful, the propulsive power is wonderful but she has to keep him balanced - she gives 100%. Steffen's horse is elastic and soft and has a different kind of harmony".

Three horses took the honours tonight and many more distinguished themselves, but there is a haunting moment in the score to which Totilas does his Freestyle during which a bell rings out around the arena as he completes his pirouette. It is a spine-tingling instant when the horse the dressage world has come to love seems to exude a magical quality. Once again tonight, the magic of Moorlands Totilas reigned supreme.....

15 horse and rider combinations competed in the Grand Prix Freestyle.
Edward Gal became the first rider to ever take three gold medals in a Dressage World Championship. Tonight's silver medallist Laura Bechtolsheimer, produced a personal best score of 85.35 with Mistral Hojris to become the first ever British rider to take three medals at a World Dressage Championship - in the Team, Special and Freestyle.
And tonight's bronze medallist, Steffen Peters, "put the icing on the cake" as he said himself, when topping up the record he set on Wednesday when he became the first American to win an individual Championship medal in Dressage in the 78 years since Colonel Hiram Tottle and his horse, Olympic, took bronze at the Los Angeles Olympic Games in 1932.

Steffen Peters, bronze medallist "We made a slight mistake int he one-tempi but we made up for it in the second pair, pirouettes have to be the weakest spot but they improved this week".

Steffen Peters, "we worked quite hard and it paid off, he felt wonderful".

Laura Bechtolsheimer when asked if she might change her Freestyle test "a horse grows into a Freestyle test and I would like to perfect this one first!"

Linda Zang, Ground Jury President talking about the Spanish stallion Fuego "the crowd loved him - the Spanish are slowly but surely moving further into the spot of dressage and its wonderful to see a new country joining in".