Corinth Did It Again at the 2010 Swiss Dressage Championships 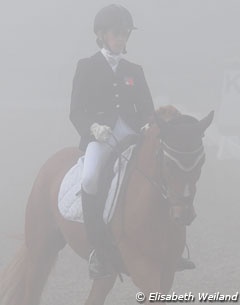 After several days of cold, windy and rainy weather in Switzerland it changed just in time for the Swiss Dressage Championships 2010, held from 20 to 22 August 2010 in Eggenwil near Zurich.
Martin Kroll and his family, who organised the championships, built a high quality outdoor arena on their beautiful property at the end of 2009 to provide excellent conditions for the best dressage horses of the country.

Their efforts were well rewarded with a vast number of participants and visitors who came to see the fight for the Swiss title in four categories: Pony riders, Juniors, Young Riders and seniors (Elite class). Surprisingly sudden tropical temperatures demanded everything from horses, riders and spectators alike.

In the pony division the 8-year old gelding Arts Domingo, ridden by Naomi Winnewisser and owned by former Olympic dressage rider Francoise Cantamessa, won both rounds to earn the Swiss Champion’s title. Behind them was the impressive 20-year old Welsh pony stallion Rhythm and Blues, who has attended many European Championships in the past under the Swiss flag. He won the silver medal with his owner Estelle Wettstein. Bronze went to Mirjam Gasser on the cute mare Nice Lilly in her last year in the pony division.

In the Young Riders division the fight for the title was more exciting with Simona Aeberhard winning the first class on Hans Grunder’s wellknown breeding stallion GB Riccione ahead of her Eu-Ch team mates Sophie Aiko Müller on the 15-year old Sachsen gelding Laser III and Anne Rita Bertschy’s KWPN gelding Tenson. A mistake prevented Riccione from placing better than 4th in the second round while Tenson won the test ahead of Laser III and Bocelli, a Hanoverian ridden by Philine von Bremen. The freestyle on Sunday was decisive for the title and though Simona Aeberhard and Riccione were able to improve a lot and scored almost 71%, Sophie Aiko Müller and Anne Rita Bertschy scored even higher than the winner of the first day. So Anne Rita Bertschy won the YR title almost 2% ahead of Sophie Aiko Müller and Simona Aeberhard got bronze.

Corinth Does It Again 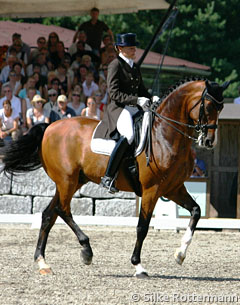 In the Elite class, the senior Championships featured more than 20 competitors in the first round, the Grand Prix. The Australian Olympic rider, Hayley Beresford, was invited by the organisers and competed „hors concours“ on her Olympic mount, the Lusitano Relampago do Retiro, and on Daniel Ramseier’s impressive Ferro- mare Ferra. Swiss based German Hendrik Lochthowe also started hors concours on Harli Seifert’s successful stallion Rubin Royal.

Earlier this month Marcela Krinke- Susmelj with her 14-year old Oldenburger gelding Corinth and Elisabeth Eversfield- Koch with the 17-year old Holsteiner gelding The Lion King B have been nominated to represent Switzerland at the WEG 2010 in Lexington, Kentucky. Both were the favourites for the Swiss Championships title with their prospective WEG mounts.

In the end Hendrik Lochthowe won the Grand Prix not far ahead of Corinth and The Lion King B. The beautiful Trakehner stallion Distelzar, 2000 premium stallion and Bundeschampionat’s finalist 9 years ago, followed closely behind them. With owner Andrea Wicki- Mäder the Gribaldi son impressed with his elegance and expression. Beresford and her two horses Relampago and Ferra were fifth and sixth, whereas Christian Pläge placed his current Grand Prix mount Lambadero, a 12-year old Holsteiner, in 7th position. 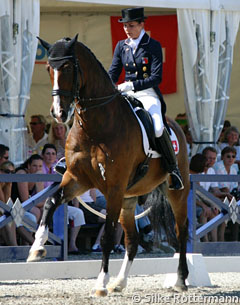 In the freestyle on Sunday Corinth was in much better form than at Aachen and showed a good ride with settled piaffe and passage to score over 75%. The huge leggy The Lion King B couldn’t match that result, but 73,7% secured him a well deserved silver medal in front of Distelzar with Andrea Wicki- Mäder who was also 3rd in the freestyle. Christian Pläge came 4th in the overall rankings with Lambadero.

Corinth, who was the title defender at the Swiss Championships, gets a break now before the built-up for the WEG begins. „I hope we do well for our country in Kentucky,“ said Krinke- Susmelj after the prize giving.

The 2010 Swiss Dressage Championships concluded with the retirement of Christian Pläge’s Danish bred Regent,. The bay gelding, who has been a Swiss team horse for many years, got a farewell ceremony following the Elite freestyle. The horse was retired from competition aftter the withdrawal of Silvia Ikle’s Salieri CH from WEG qualification. The Swiss Federation had decided only to send two individual riders on the expensive trip to the United States and Plage realised that his 18-year old Regent would not be part of that selection. Though still fit, Pläge withdrew Regent from all competition.