Photo Report: All the Action from the 2010 German Youth Riders Championships 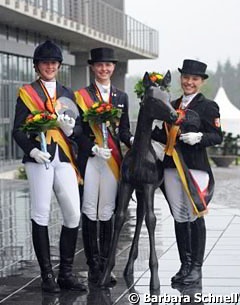 The 2010 German Youth Riders Championships took place in Aachen this year from 13 - 15 August 2010 on the world famous show grounds of the CHIO. For the national championships, the dressage arena's were turned the other way round. The warm up was in the stadium and the competition rings were the two main warm-up arena's outside the stadion

. They were beautifully decorated with plants which made the event as picturesque as can be.

Unfortunately heavy rain fall dampened the spirits slightly, but the riders were as competitive as ever and battled strongly for the medals. 2010 German Pony Champion is Jessica Krieg on her second pony Ghost. 2010 German Junior Riders Champion is the unbeatable European Junior Champion, Charlott Maria Schurmann on World of Dreams. In the absence of Fabienne Lutkemeier on D'Agostina, Sanneke Rothenberger freewheeled to the 2010 German Young Riders Champion title.

Barbara Schnell was on the scene to take great photos of this fantastic weekend in Aachen.