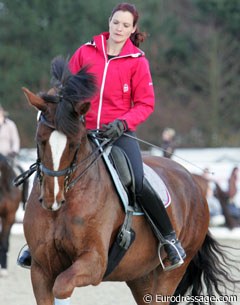 The 9-year old Baden Wurttemberger bred mare Girasol has been sold to Nadine Capellmann. The liver chestnut mare is considered to be one of the best upcoming Grand Prix horses of Germany, which should provide an answer to Totilas in the future.

Girasol is bred by Matthias Schönenberger and is by Gribaldi out of the double Baden Wurttemberger reserve riding horse champion Lerida (by Landioso x Kalman). Under Jasmin Schaudt (née Butzengeiger) Girasol became the shooting star on the German Grand Prix firmament. She booked her first FEI success at Donaueschingen, but she really sparked the interest of many international buyers at the CDI Hagen.

According to various online sources, many dressage riders have tried her out (including Andreas Helgstrand, Edward Gal), but Jasmin's husband Martin apparently asked an astronomical price for the mare to scare off buyers. However money was no issue for Capellmann and she acquired the mare, which arrived at her stable since Saturday 22 May 2010.