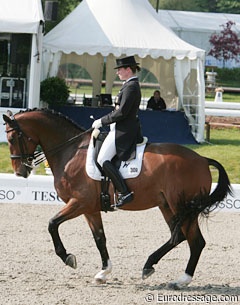 German team anchor rider Isabell Werth was interviewed by Tim Welland of Hunter Jumper News about her preparation for the 2010 World Equestrian Games.

Could you describe a typical training day?
Since my son Frederik’s birth last year the day now starts with him! I then start with the horses at around 9.00am and I can ride about seven horses per day. The rest of the day is now usually based around the stable business and Frederik.

How many horses do you have at the moment?
At the moment we have around about 40 horses under the saddle, so my whole team is very busy!

Do you have any up and coming horses that you see real promise in?
I have two horses with a lot of potential and great futures. The first is El Santo who is a horse with a lot of hope – he competed in the FEI World Cup™ in Gothenburg in February and I think he’s really talented; he did a great job there and also last week in Dortmund. The next horse is Don Johnson who is quite naughty at the moment, but he is an outstanding talent and I hope I can bring him to the Grand Prix at the end of the year.

Can you briefly explain El Santo’s and Don Johnson’s personalities?
With Ernie (El Santo) training is easy as he’s so uncomplicated and polite, and I would say he is the easiest horse at my stables. Don Johnson is a very strong character and needs a few more shows to increase his experience and calm down, so it is difficult for him to come to big showgrounds at the moment.

What are your plans now that the indoor dressage season is over?
We have to prepare for the outdoor season at the beginning of May and we will try to concentrate on the big shows, then come back in good shape and be prepared as best as possible for the World Equestrian Games (WEG) in September 2010.

Which shows have you got lined up between now and the World Equestrian Games?
The big shows will be in Munich, Wiesbaden and, of course, Aachen, and then we have our National championships in Munster. We have a lot of shows up until August, and then after the German Championships we have the team nominations, and we will see what’s going on then.

Are you looking forward to London 2012?
Yes, it’s a big goal with one of the young ones, and Hannes (Warum Nicht) will be 16 then so he’s a possibility; I think we will have a few options and I hope we will be able to fight for the top places.

By Tim Welland for Hunterjumpernews.com