Two Horses Drop Out After Second Dutch Trial for 2010 WCYH 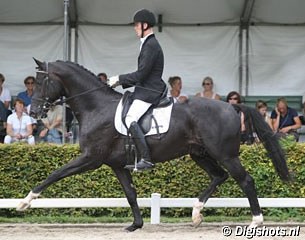 Two horses are out of the running to represent the Netherlands at the 2010 World Championships for Young Dressage Horses. At the second Dutch selection trial for KWPN horses at the KNHS Head quarters in Ermelo, The Netherlands, the 5-year old Angush failed to impress and the 6-year old Zorro was dropped from the long list.

The black stallion Angusch (by Special D x Jazz) was very tense in the second round and did not make the cut for the third trial. "During the first round he showed a super test," Van Silfhout said, "but yesterday he was tense and made a lot of mistakes because of that. They were jumping in the other ring and he was distracted by that. It's a pity but we keep on training. He's a really nice horse, still young and inexperienced."

In the 6-year old division Geert-Jan Raateland and Zorro (by Jazz x Contango) were scratched from the list and replaced by Hans Peter Minderhoud with Zizi Top (by Tango x Ferro), who were unable to attend the first trial.

The third selection trial is on Monday 26 April 2010. The combinations have to ride the preliminary test and afterwards are given training advice by Johan Hamminga.