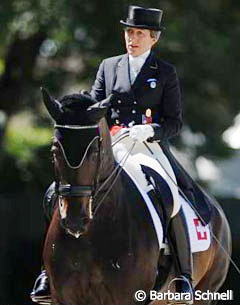 Switzerland's top Grand Prix rider Silvia Ikle has announced that she'll take a participation at the 2010 World Equestrian Games in Kentucky, USA, under consideration. Ikle's number one Grand Prix horse Salieri CH has been recovering more than a year from an injury and only recently got back to work.

"At this point in time, I can't make a definite decision about competing at the WEG," said Ikle. "Due to an injury Salieri hasn't competed in more than a year and he's now in a phase where we just picked up his training. I can only make decisions about his future once he's back in full training."

Ikle and her 16-year old Swiss bred gelding Salieri (by Sinclair x Sacremento Song xx) will have to reconfirm their form at Swiss selection shows to obtain qualification scores for Kentucky.

"So for the moment I won't be availabe for team nomination for the 2010 WEG and I would also be happy if Switzerland were to select a young team," Ikle admitted. "Of course it would be nice to finish my long career in top sport with a ticket to Kentucky. But I would go against my own principles if I were to force my horse or risk going just based on luck. If Salieri and I are able to prove our form according to my principles of doing everything for the welfare of the horse, than it would be an honour to go to Kentucky."