Salieri Not to Compete at 2009 European Dressage Championships 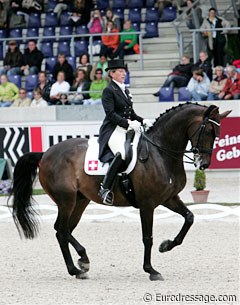 One of Europe's most beloved but scarcely competed Grand Prix horses, Salieri CH, will not be showing at the 2009 European Dressage Championships in Windsor, Great Britain. Owner and rider Silvia Ikle announced the withdrawal of Salieri from participation on June 15, 2009.

An old injury has flared up again and prevents Salieri from competing at Aachen and Windsor. In March 2009, Salieri had strained a tendon in the pastern but it healed well. Ikle was training for Aachen but the gelding's eagerness and bubbly temperament made it difficult. Salieri was difficult to control and occasionally bucked. During such an explosion of energy, Salieri re-injured himself.

A vet check carrier out on June 15 ruled out any possibility of a swift recovery. The injury has to heal fully before Ikle can take up any light training. Aachen and Windsor are out of the question.