Ashley Holzer Takes Two in a Row at 2009 CDI Toronto 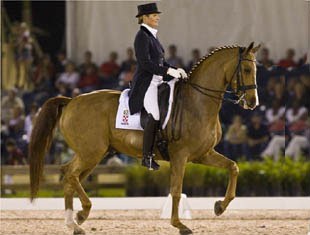 Canadian Olympians Ashley Holzer and Pop Art once again proved they are in a league of their own when it comes to dressage at The Royal. The pair produced a nearly perfect Freestyle test to earn a score of 75.85%, more than six points over their closest rivals, and top place in the CDI3*.

Holzer’s test heavily emphasized “Poppy’s” phenomenal piaffe and passage skills, including a piaffe turn on the haunches that took your breath away with its ease and elasticity. Last to go this evening and following Tina Konyot’s explosively expressive stallion Calecto V, Holzer’s test was the very definition of relaxed and refined, but never stuffy, harmony between horse and rider.

“I had him here last year and he was tense in the indoor arena,” explained Holzer following the awards ceremony. “He was so much better this year. I was a little worried today because I thought the crowd would be more electric. It was very electric last year. I warmed up quite a bit and the crowd was not so electric, so I said “okay buddy, you really gotta kick now!”

The big news in dressage circles in Canada is the coming on board of new Team Advisor and Coach, guru Robert Dover. Holzer was not the only rider to gush with excitement when discussing the next few months and the plans Dover has for the Canadian contingent.

“I am thrilled about our new coach Robert Dover. He has vision and has made Canadians sit up and realize what great riders, horses, coaches and sponsors we have. We haven’t really taken advantage of the great people we have available to us in this country before now. He stood in front of us today and said he is 250% for us and if we need him somewhere, he will go there. And that he expects the same level of commitment and focus from Canada’s riders. I think it’s about time that we had a coach that pushes us to the next level. We are not trying to be sixth in the world, we want a medal. So let’s behave like we are out to get a medal.”

Second place went to Tina Konyot of Conneticut with her ultra-expressive Danish Warmblood stallion Calecto V. Third went to Denielle Gallagher-Legriffon who put in a lovely test with her elegant and classically put together Russian-bred stallion Abrikos.

Stephen Clarke, President of the Ground Jury, explained that yesterday in the Grand Prix, everyone was a little nervous and unsure of the ring and the crowd, while this evening they all came into the ring relaxed and ready to put on a show. Holzer impressed him most though with the harmony and comfortable relationship she has with her long-time partner, Pop Art.

“The partnership they have is the most unique and perhaps perfect,” Clarke related. “The harmony mark goes up very, very high. Technically her piaffe scores and marks for transitions are also very high. You don’t often see quality like that. Of course there is always room for improvement but the nice thing about Ashley’s horse is he does nothing wrong. She has really big highlights and these things count for a lot of marks.”