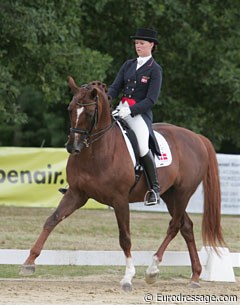 Two German riders are entered to compete Kirsten Sieber and Charly, a pair which has already made its debut at Grand Prix level and Ann-Kristen Dornbracht on Gryffindor (by Giorgione).

For Denmark Anna Kasprzak and Anna Kathrine Elkjaer Holm have been selected. The former will saddling her licensed stallion Blue Hors Future Cup (by Florestan), while the latter is riding Bernstein (by Traumdeuter).

For France brand new national champion Camille Judet-Cheret (video) and her chestnut stallion Mister Grand Champ (by Rohdiamant) as well as Julie Pellerin and her 15-year old Westfalian World Flash (by Wachhorst) have been nominated. Amy Jager and her 18-year old Dutch warmblood Jive (by Ulft) will represent Canada in Frankfurt. Jager is from Puslinch, Ontario and qualified on an average score of 68. 725%. For Portugal, Mafalda Galiza Mendes and her chestnut gelding D'Artagnan have been selected.

New Zealand young rider champion Hannah Appleton, who is in her second year of a Bachelor of Applied Science in agriculture and equine studies at Massey University, is bringing her Thoroughbred cross mare Zactac Graceful (by The Graduate x Le Falu). They scored 68.800% on average.