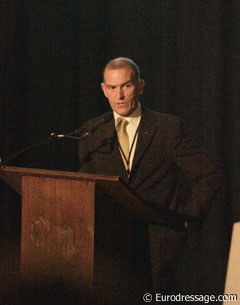 Never before has the Global Dressage Forum been so relevant, interesting and aiming for the heart of the matter as the 2009 edition. Hosted for the 9th time at Joep and Tineke Bartels' Academy in Hooge Mierde, The Netherlands, the forum took place on 26-27 October 2009.

This renowned two-day conference on the state and future of the dressage sport tapped straight into the current issues that shake and move the dressage world. After a word of welcome by Richard Davison, FEI Sport Director David Holmes opened the forum with an official statement that the FEI is investigating the controversial video of Patrik Kittel riding Scandic in the warm-up at the 2009 CDI-W Odense. Scandic is seen in the rollkur for an extended period of time and briefly has his blue tongue hanging limp out of his mouth. The footage was shot by the Danish Epona TV and caused a tsunami on the online social communities resulting ina petition for the abolishment of the rollkur and a possible White Hat protest campaign at the 2010 World Equestrian Games.

Holmes said, “the FEI’s main concern has always been, and always will be, the welfare of the horse. We are taking the issues raised in the video and in the comments made by other Youtube videos very seriously, and have opened a full investigation. The conclusions of this investigation will be made public in due course. It must not be assumed that this investigation is a negative thing against Patrick. It’s open and objective. We will be arriving at a conclusion as quickly as we possibly can.”

Holmes realized that a better training of FEI Stewards is vital to prevent such situations from happening again at shows and he stated that better "stewarding is part of the FEI's clean sport program." 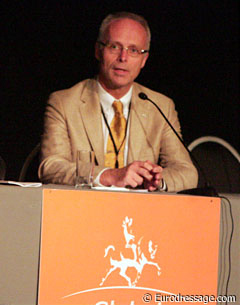 Norwegian Trond Asmyr, the new FEI Dressage Director who came in function in May 2009, landed in the middle of a storm when he took up his job. "I started with Isabell (testing positive to doping) and now Patrik Kittel this week. But I love my job," Asmyr admitted. The sympathetic director opened up about the 3,6% reduction in FEI registered horses this year as well as several show cancellations due to the difficult economic situation. Nevertheless, there was an increase in shows and Asmyr stressed that not show jumping, but dressage filled the stands at the 2009 European Championships in Windsor.

Asmyr applauded the work the Dressage Task Force has done this year and is very positive about the report they submitted for the 2009 General Assembly in Copenhagen in November. "I've been in dressage since the 1970s and there haven't been so many changes in the sport in 30 years than this year alone," he noted. Asmyr touched upon the changed prize giving ceremony at the Europeans in Windsor and said "this is not the final way that we are going to do it, but we have to take care of the safety of the horse." At the end of his speech he also stressed the fact that a more intensified education and training of judges and stewards are essential.

Holmes returned to the lectern to highlight two more important issues troubling the FEI. Firstly, the organization of championships has to become more attractive. "The FEI is asking too much money from organizing committees to host a championship," he said. "We also have to improve the attractiveness to the media. Television is necessary to attract sponsors." Holmes also mentioned that the FEI Doping and Medication Committee is publishing three new lists distinguishing doping from medication. The FEI is working towards a harmonization of laboratories so that they are all testing the same way with the same level of sensitivity. Stable security also has to improve by for instance installing invisible cameras.