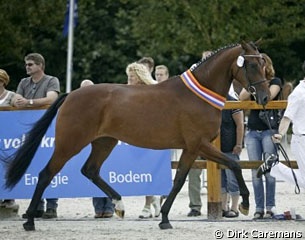 Brooklyn became the winner of the 2009 KWPN Mare Championships held at the KWPN Paardendagen in Ermelo, The Netherlands, today. The charming 3-year old mare by United out of Ofanny (by Havidoff)

outclassed all her peers in the Championship.

Brooklyn is owned by Patricia Heyting-Knipping from Angeren, The Netherlands, and was the first mare she has bred herself. The dark bay mare excelled with her powerful movements and had already become Guelderland regional champion. She now claimed the national mare champion's title. President of the jury Arie Hamoen said, "what a natural way of moving. She's a real example."

Breolita, a UB40 offspring out of star preferent mare Prelita (by Krack C), became the reserve champion. She is owned by stud farm Centrum. This mare moves very uphill with an expressive front leg. Bulinda (by Vivaldi x Ferro) owned by Ad Valk and bred by A van der Koppel slotted in third.

Nine mares in total made it to the champion's ride. They were sired by Olivia, Oscar, Sandreo, Johnson and Painted Black.