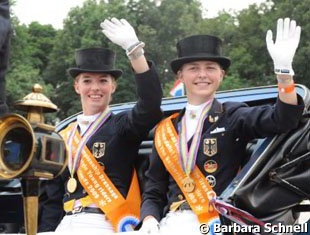 During the European Champions Dressage for Juniors and Young Riders being held on the show grounds of the Royal Dutch Equestrian Federation in Ermelo, The Netherlands, the leading nations in the dressage sport, Germany and The Netherlands, were distributing all the individual medals amongst each other. On Sunday, the final day of these European Championships, both Juniors and Young Riders were riding their freestyle to music test.

The German Sanneke Rothenberger, winner of Saturday’s individual gold medal, added another golden one to her collection by also winning the freestyle to music test on her black gelding Deveraux, scoring 77.650%. Second place and the silver medal was for Dutch Junior Brigit van der Drift and her ride Twister with 73.950%. The bronze medal was won by the second German rider, Louise Lüttgen on Habitus, totalling 73.250%. 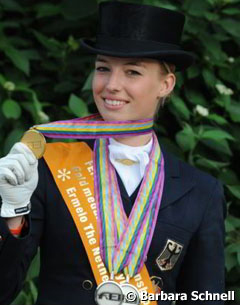 For the Young Riders, it was Fabienne Lütkemeier riding D’Agostino for Germany who won the gold medal with the winning score of 77.750%. The Dutch Young Rider Lotje Schoots, who won her 10th gold medal on Saturday in the individual test, won the silver medal today with her Torricelli, scoring 77.450%. And another medal for The Netherlands went to Marrigje van Baalen riding her stallion Don Cardinale to the bronze medal with 76.350%.

The competition in the freestyle to music test for the Young Riders was very exciting. Schoots and Lütkemeier had already been scoring almost the same percentages in the previous tests with the advantage having been for Schoots. Today, Lotje had two very small mistakes in her otherwise fantastic test and Lütkemeier took the advantage this time.

President of the judges’ panel, Ghislain Fouarge said: “When judging, I didn’t know who was in the lead, Schoots or Lütkemeier, that’s how closely those two ladies were riding during the entire championships. In the end, I seemed to have judged the technical part of Ms. Lütkemeier by 0,5 % more, but Lotje Schoots received 1,0% more for the artistic part. I really liked the way she structured her freestyle test and I also enjoyed the music.” 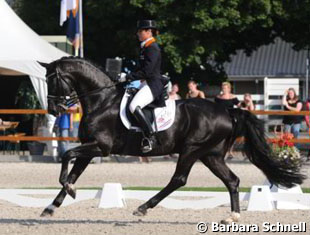 Marrigje van Baalen received a big compliment from Fouarge: “The harmony between Marrigje and her horse was excellent. It was the best that I’ve seen during the entire championships.

The 2009 European Championships Dressage for Juniors and Young Riders were concluded with the prize-giving ceremony and a lap of honor for today’s gold medal winners, Sanneke Rothenberger and Fabienne Lütkemeier in a carriage drawn by two Frisian horses. As to the organization of the championships, they were declared by officials and competitors as the best ones ever organized. During the five days of the championships, approximately 10.000 visitors came to the show grounds of the Royal Dutch Equestrian Federation, more than 2.500 on the final day. 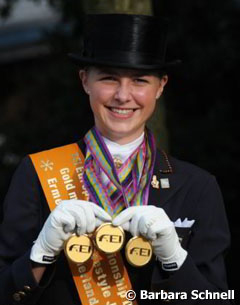 The website of the EC had more than 60.000 visitors who were able to follow the entire competition via live-streaming on the internet. The Royal Dutch Equestrian Federation received a lot of compliments for the organization and all the details such as the condition of the ground, the stable management and the stewards who kept an eye on the well-being of the horses. The president of the organization, topsport manager Maarten van der Heijden, said that these European Championships might be considered as a test event with an eye on more events to be organized in the future. “First, we will evaluate everything, but I expect that there are more events to come”, he promised.

Photos from the Scene by Barbara Schnell