German Equestrian Sport in Crisis: All A and B Teams Suspended 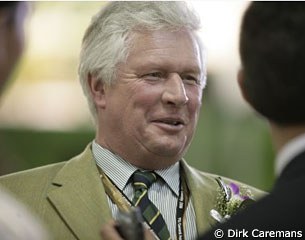 The German Equestrian Sport is in a crisis following public statements from top athlete Ludger Beerbaum about medication control and numerous positive doping results in show jumping, initially at the 2004 Olympic Games (Goldfever) and more dramatically at the 2008 Olympic Games

A few weeks ago, a public debate was held in Langefeld, Germany, between top athletes and equestrian professionals about doping and medication. At this session it was discussed that more transparency is needed about the medication of the German team horses. It has been suggested that German A and B-team riders should keep a log in which they record every piece of medication that has been administered to a horse. German dressage rider Isabell Werth stated, "my horses belong to Madeleine Winter-Schulze. What I give or not give to my horses only concerns me, the owner and my stable crew."

The whole debate reached a boiling point last week when leading German show jumping rider Ludger Beerbaum stated in a German newspaper that "in the past everything that could not be detected was allowed." He further disagreed with the log which should be kept by German team riders. "You run the risk that a buyer of a million dollar horse wants to see all the information in the log."

The German Equestrian Federation has now drastically decided to suspend all A and B-teams of the three Olympic disciplines. It involves 78 riders. Ludger Beerbaum has currently been suspended from participation at nation cup events. The German Equestrian Federation is also about to loose its TV-contract with the German national broadcasting stations ARD and WDR which do not want to renew the annual one million euro contract unless the doping issues in Germany are resolved.

Breido Graf zu Rantzau, president of the German Equestrian Federation, stated that "with the suspension of the teams, we want to take an important step towards making the sport more respectable. Before any rider is resubmitted to the team, he will have to talk to a special independent committee where he has to explains his work ethics as a top rider. The committee will then decide if this rider can be resubmitted to the team. It can also decide on certain punishments." The members of this ethics committee are not yet known.