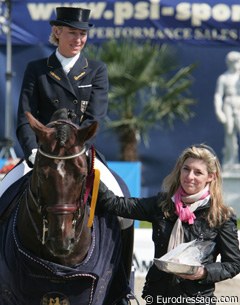 Another early morning wake up call: 6 AM. Sigh. But hey, everything for the horses, right?! I drove from the hotel in Melle back to the show grounds and today it promised to be a really nice day.

The weather would be great with a 20° forecast, but the chilly wind set in early in the morning and wouldn't quit blowing all day. Duty called at 7.30 AM for the warm up class of the first Medien Cup qualifier this season.

The Medien Cup, sponsored and organized by CP-Medien under the supervision of Ralf Hartmann, is a superb initiative to generate a bigger influx of FEI horses into Grand Prix classes. The Medien Cup comprises two classes per qualifier: a warm up class and a qualification Short Grand Prix. The two top ranked riders at each qualifier obtain a berth for the finals, held at the Turnier der Sieger in Munster August 20-23, 2009. 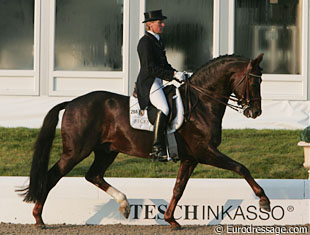 The Medien Cup, sponsored and organized by CP-Medien under the supervision of Ralf Hartmann, is a superb initiative to generate a bigger influx of FEI horses into Grand Prix classes. The Medien Cup comprises two classes per qualifier: a warm up class and a qualification Short Grand Prix. The two top ranked riders at each qualifier obtain a berth for the finals, held at the Turnier der Sieger in Munster August 20-23, 2009.

Many say that the first rider of a class never gets scored as highly as the last riders of the pack do. Well the exception proves the rule, or was it because a big name rider was going first? Ingrid Klimke and her double World Young Horse Champion Damon Hill NRW (by Donnerhall) were the first to go and immediately scored the winning mark of 72.800%. The basic gaits of this horse are very high quality and pure in rhythm. The passage was well suspended but at the end of the test, the stallion ran out of steam and the passage got a little uneven. The piaffe had a nice rhythm but was still quite forward. 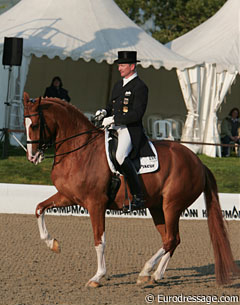 Sometimes you go to a show and think: "that's the kind of horse I would love to have at home." Of course I fancy big movers, but they wouldn't be my choice of horse for at home. Sometimes you see a horse that just looks so rideable, lovely, elegant and light and you think you just admire its simplicity and honesty. Hubertus Schmidt's Donnelly is exactly such a horse.

Donnelly is an 8-year old Westfalian gelding by Donnerruf x Athletico. He came into Hubertus' stable one year ago as a third level horse and is now Grand Prix ready. The pair showed so much lightness and elegance. Everything looked soft and easy without losing engagement. The piaffe and passage were confident and in rhythm. They scored 71.00%

Bianca Kasselmann and Deja Vu FBW, a 9-year old Baden Wurttemberg bred stallion by Dr Jackson x Rubicon xx, finished third. The stallion was previously ridden by Katrin Burger and then came to Hof Kasselmann to be sold to Natascha van Dijk, wife of the legendary electronic house DJ Paul van Dijk. Like any horse ridden by Mrs Kasselmann, Deja Vu is one big ball of muscles ridden to the maximum of his potential. The judges awarded their test with 68.400% 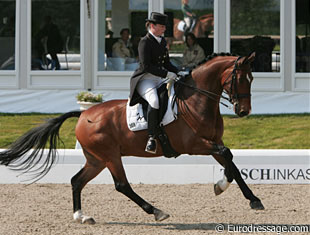 In the warm up El Santo looked very green at Grand Prix level. The piaffe was forward, very much swinging from left to right at he didn't want to do the final piaffe at X, though Isabell fixed it straight away by performing the required steps five meters further on the centreline. The pirouettes looked strenuous with a loss of impulsion and difficulties on the exit. The two tempi's were not smooth but there were no mistakes, the one tempi's were good. El Santo stood out with his trot and canter extensions and showed great potential in passage. An interesting horse for the future. 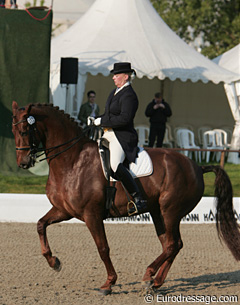 There were quite a few interesting horses to be seen in the warm up class, though many of them looked too green for this test and should/could have stayed home for some more practice. Others were absolutely not Grand Prix horses but because they could do a few steps of passage or piaffe, their riders seemed to have decided they were ready for this level.

Tanja Wickenkamp's Endever DJ (by Ehrentusch x Damenstolz) is an old fashioned looking horse: heavy in the bones, straight in the shoulder, long in the back and flat in the croup, but the liver chestnut gelding probably had one of the best piaffes of all competing horses!

I was very much interested in the performance of Hubertus Schmid's Dutch warmblood gelding Tristan (by Havidoff x Wisconsin). The German Olympic team rider acquired Tristan in The Netherlands late 2007 with his business partner Jochem Arl and has now presented the dark bay gelding at GP level. How would this German perform on a Dutch horse? Tristan did not look as confirmed as Donnelly and struggled with the piaffe. He always landed his right front hoof on the coronet band of the left one and wrestled with finding the rhythm. The pirouettes were very nice: tiny and well jumped. They finished tenth with 65.10%. 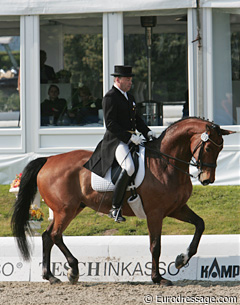 Wow, another Belgian competing at Grand Prix level so this was a pair I wanted to watch! Dusseldorf based Belgian Grand Prix rider Johan Zagers presented Rolls Royce, a 10-year old Oldenburg gelding by Rubinstein x Feinbrand. Owned by Jef van Looveren, Rolls Royce is a super talented Grand Prix horse but it was his rider seemed to be struggling more with the test than his horse was and incomprehensibly retired. The bay had such a charming light passage and was soft in the contact with the bit. Because of a loss of impulsion in the pirouette, the horse changed lead exiting. Zagers lost his concentration and made mistakes in the following two tempi's. When the one tempi's started out on the wrong foot too, he retired. Tua Culpa.

The Medien Cup finals test was on Saturday and Isabell Werth won with El Santo on a score of 75.400%. Schmidt and Donnelly finished second on 73.300% while Klimke and Damon Hill posted a score of 71.800% to land third place.