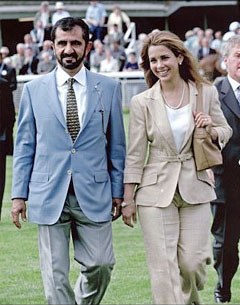 The FEI's efforts to promote the zero-tolerance policy on doping and medication is not really making progress. As a matter of fact, the FEI President Princess Haya has recused herself as FEI President in the matter of husband Sheik Al Maktoum's positive doping case.

On Friday, 3rd April, HRH Princess Haya was officially notified by the FEI that her husband HH Sheikh Mohammed Bin Rashid Al Maktoum, Vice-President and Prime Minister of UAE, Ruler of Dubai, through his representative, had advised the FEI of positive tests in horses on which he had recently competed in the discipline of Endurance.

By return, Princess Haya recommended that the role of President in this instance, and all matters relating to this subject, be deferred to Mr Chris Hodson (NZL), Second Vice-President of the FEI, who is himself a lawyer.

HH Sheikh Mohammed Bin Rashid Al Maktoum released an official statement on his own with the following information: 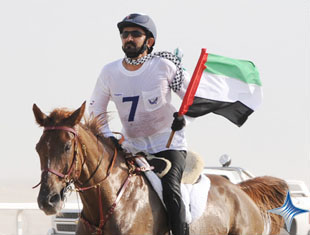 Through his official representative, HH Sheikh Mohammed Bin Rashid Al Maktoum, on Friday, 3rd April 2009, took the unprecedented step, for an FEI athlete, of contacting the FEI’s Legal Department to advise them that, following routine post competition testing carried out by Sheikh Mohammed’s own personnel, his team had reported to him positive tests in competition horses on which he had competed. One horse had competed internationally, the other had competed in a national event (UAE).

As a lifelong horseman with the highest regard for his horses welfare and the rules and regulations governing all horse sports, His Highness immediately requested his representative to contact the FEI and advise them of this information in order that they may correct the placings as Sheikh Mohammed considers his results null and void. Additionally, he has offered the highest level of cooperation to the FEI.

The substances that were found by his team were Guanabenz and 16b Hydroxy-Stanozolol.

Whilst completely unaware and utterly condemning the administration of these substances, His Highness has volunteered his acceptance that he is legally the ‘Person Responsible’. Nevertheless, for his own satisfaction and the welfare of his horses, His Highness has instigated a widespread internal investigation into the circumstances surrounding the cases – the results of which will be shared with the FEI.

Having previously been entered for an Endurance race in the UAE on Saturday, 4th April 2009 Sheikh Mohammed started the race and was holding a significant lead. However, in view of the fact that his own internal investigations are not yet complete and the fact that he had notified the FEI of the positive cases, His Highness decided to withdraw before completing the course, in effect imposing an immediate ban on himself despite having not received such a requirement from the FEI at that point.