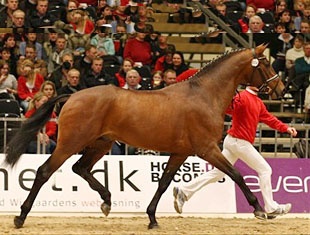 in total for the premium ring.

Poul Graugaard, Ole From Christensen, Jens Trabjerg, Bjarne Nielsen and Karina Christiansen considered L'Espoir (by Lord Loxley x Warkant x Gelria/T) the best stallion of the collection. Owned by Per and Lotte Skjaerbaek of Priess Stutteri and Paul Schockemöhle, the bay sire is also the reserve champion of the 2008 Mecklenburg licensing.

For the first time, dressage stallions did not have to do free jumping at the Danish Stallion Licensing, but they were judged on their conformation and gaits. The stallions were presented in hand, on the lunge line and in freedom. L'Espoir scored a 10 for his canter. "He's the prototype of the future dressage horse," said Danish breeding director Karina Christiansen. "He moves uphill all the time with swing and elasticity."

Four dressage bred colts made it into the premium ring: 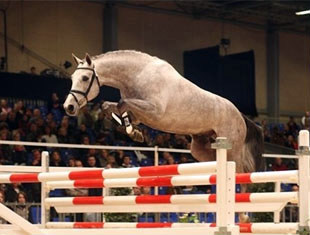 The auction price record holder Le Champ ASK was named show jumping champion of the licensing. This Oldenburg bred colt by Last Man Standing sold for 1.1 million euro to Blue Hors Stud at the 2008 Oldenburg Stallion Licensing a few hours after he had received the licensing champion's title there.

Le Champ received two tens for his show jumping capacity. "He is totally without limits," said Christiansen. "We regret that the scale doesn't go higher than 10!"

The premium show jumping colts are: 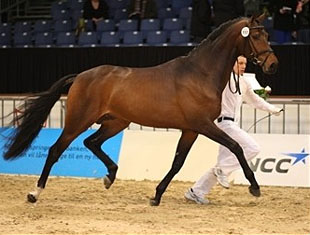 The 4-year old Danish bred Blue Hors Rosoff won a gold medal for being the best 4-year old presented at the licensing. Rosoff is by Blue Hors Romanov x Prince Mab xx x Miami Springs xx and is bred by Linda and Poul Erik Fredriksen. The couple received the Åge Ravns trophy for this accomplishment. "A fantastic half blood stallion which has everything you can hope for," said Christiansen.

Back to the 2009 Danish Warmblood Licensing Index