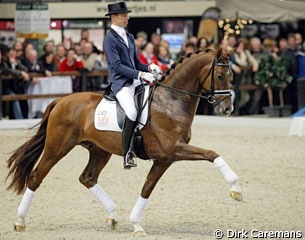 Hans Peter Minderhoud and Zizi Top (by Tango) won the L-level finals, beating season rivals Gerine Maree on Ziësto (by Lancet). Zizi Top scored a 9,5 for his expressive trot, while Ziesto got the same mark but was praised for his self carriage and cadence. Jennifer Sekreve and Zambuka (by Scandic) slotted in third. They got a 9 for their powerful canter.

Edward Gal and the black stallion Wynton (by Jazz x Matador II) beat Westpoint by one point at M-level. Wynton's highest mark was a 9,5 for trot. He got a 9 for walk and canter. Emmelie Scholtens and Westpoint (by Jazz x Michelangelo) finished second. This pair scored 9,5 for walk and 9 for trot and canter. Danish team rider Anne van Olst landed a third place on Lord Leatherdale (by Lord Loxley).

Hans Peter Minderhoud and Vivaldi finished the 2009 Stallion Competition circuit with his fifth victory in a row at Z-level. The chestnut stallion by Krack C x Jazz has been unbeatable at all qualifiers and in the finals. Vivaldi thrilled the judges and the crowds with his extended trot in which the front legs seemed to go almost horizontal. Judge Mariette Sanders said that "this stallion has everything we want to see in a dressage horse." He got a 10 for trot. Minderhoud placed second on Johnson (by Jazz x Flemmingh). Johnson, a former licensing champion, got a 9 for canter and showed much balance in the half passes. Edward Gal and Santano (by Sandro Hit x Silvano) pushed for third place.

Photo copyrighted: Sjoert.com
Sjoert has covered the entire 2009 KWPN Stallion Licensing and has a massive catalogue of photos from this event.