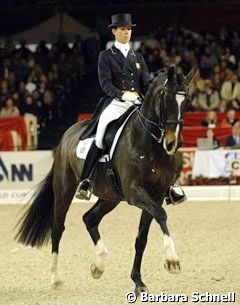 Today the FEI Tribunal has issued its decision in the Positive Medication Case involving Mythilus ridden by Ms Courtney King-Dye, the person responsible ("PR"), and representing the US Dressage Team at the 2008 Olympic Games in Hong Kong.

The horse was sampled at the Olympic Games on 19 August 2008 and tested positive for Felbinac. Felbinac is a non-steroidal anti-inflammatory drug (NSAID) used to reduce inflammation and pain and, accordingly, is classified as “Medication A” Prohibited Substances under the FEI Equine Prohibited List (VR Annex III).

At a preliminary hearing held during the Olympic Games on 22 August 2008 it was decided to maintain the provisional suspension until the final decision of the case.

The hearing in this case was held at the FEI Headquarters on 7 September 2008. Before and during the hearing the PR presented testimonies and legal arguments and the United States Equestrian Federation ("USEF") requested that in case of a decision against the PR the US Dressage Team does not forfeit its 4th place at the Olympic Games.

The Tribunal did not accept the PR's argument that the exception contained in Equine Anti Doping and Medication Control Rules ("EADMCR") Article 2.1.3 to a medication rule violation in case of an environmental contamination should apply, since Felbinac did not appear on the Equine Prohibited List as a threshold substance and no specific criteria was established for it on such List as a contaminant.

The Tribunal repeated its stand that the FEI policy in regard to doping and medication does not only intend to ensure a level playing field but has the additional policy consideration of ensuring that the welfare of the horse is maintained and that horses compete only when they are physically fit and capable of competing. This requires doping and medication rule violations to be strict liability or no fault offences. The PR's arguments that she had gained no competitive advantage and that the findings did not constitute any maltreatment of the horse, due to the nature of the substance and the minimal concentration detected, were therefore not relevant.

The Tribunal accepted the FEI's position that, under the clear language of EADMCR Article 10.5, in order for the PR to prove that she bears no fault and no negligence and that the sanctions should be eliminated, she must demonstrate how the substance entered the horse's systems. While elaborate, the explanations furnished by the PR were only speculations.

As a result of the foregoing, the horse and the PR are disqualified from the Games and all medals, points and prize money won at the Olympic Games by them are forfeited. Such disqualification is automatic and is not considered a sanction; rather it is an automatic mechanism used to ensure a level playing field.

As a result, the US Dressage Team with its reaming two competitors is also disqualified and loses its 4th place. The Tribunal did not accept the arguments of the USEF that the resulting disqualification of its Team, when the sampling was carried days after the end of the Team competition, is a "sanction" which is inappropriate in this case and should not be imposed. The Tribunal noted that the resulting disqualification was automatic.

In regard to sanctions, the Tribunal considered the fact that the PR is an experienced sportswoman and that the behaviour of anyone at the top of the sport and particularly at the Olympic Games must be faultless since the eyes of the world focus on performances at such events.

On the other hand, the Tribunal found the evidence of the PR and the US Dressage Team Vet to be credible and believed that neither the PR nor anyone on her behalf or related to the USEF had knowingly administered the medication to the horse. The Tribunal further accepted the PR's and USEF's arguments that they have done almost everything in their power to ensure that no rule violation shall occur. The Tribunal also considered the type of Medication A substance involved and its therapeutic applications, the fact that the same substance may not be considered as a doping substance, the specific circumstances relating to the horse's hospitalisation in Hong Kong and the possibility of contamination, the excellent stable management practiced by the US team and measures placed to try and ensure the no horse with prohibited substances participates at the Olympic Games, the efforts made by the PR and the USEF to determine the source of the positive finding, the impeccable record and reputation of the PR, the PR’s cooperation in the investigation and the hardship already caused to the PR including the fact that the US Dressage Team has already lost its 4th place at the Olympic Games.

As a consequence, the Tribunal imposed on the PR a one month suspension, which has commenced on the date of the application of the provisional suspension and ended on 21 September 2008, fine and costs.