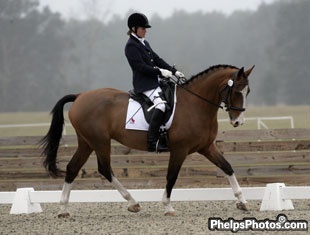 Canada’s Lauren Barwick riding Maile competing in Grade II was the first competitor at these Games to be declared winner of the freestyle competition as the Grade II Freestyle test came to a close this evening following a morning and evening round.

The pair performed to an Asian tune and expressed every ounce of their personality in the floodlit arena. Given her complete satisfaction with having already received silver for her Individual Championship test on Monday, Lauren Barwick was completely over the moon with this new result. Particularly as this marks the first gold medal ever for Canada at equestrian events of the Paralympic Games and is the culmination of eight years of hard work and dedication to the sport.

A great performance by British rider Felicity Coulthard and Roffelaar to Fiddler on the Roof was clearly more than enough to clench second place. For the 24 year old, Paralympic debutant, the delight at having achieved such a great result was evident. The choice of music and the composition was really fitting, and their partnership was able to shine as a result.

Individual Championship gold medallist Britta Naepel and the lovely Cherubin 15 rustled up the bronze medal with an upbeat performance scoring 70.277. 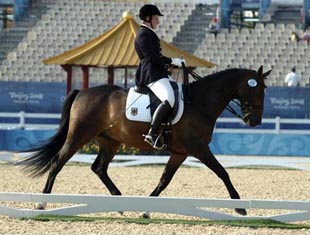 The venue was lively as the freestyles got underway in the main arena at Sha Tin for the Grade II Freestyle Championship. All kinds of music were showcased in two sessions.

Two US riders went to task in the morning sessions on the penultimate day of competition at the 2008 Paralympic Games in Equestrian. American Rebecca Hart (Erie, PA) finally had the performance she knew she was capable with Norteassa at these Games. The electric arena had been unsettling to the 15-year-old Hanoverian gelding but today they really shone – scoring 68.056% for their effort.

“I’m very, very happy with my test,” said Hart who was born with Familial Spastic Paraplegia. “I had a definite goal in mind and I met that goal. I’m pleased with my horse, it was a great ride. I worked on the expression, got him to settle and got the cadence and elegance back.”

Hart’s test featured canter work (which isn’t required in the Grade II Freestyle Test) and lovely shoulder in and half-pass. She looks forward to continuing her progress with the horse, including eventually showing him Prix St. Georges at able body shows.

“My ultimate goal is the 2010 World Equestrian Games,” said Hart. “This has been a great experience and the facility has been fantastic.”

Hart led after the first group of riders, and sat in medal position until the final rider went in the second session this evening. Hart painstakingly had to settle for fourth. 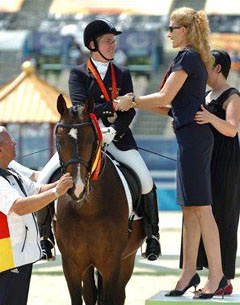 Germany’s Britta Naepel, second to enter the busy arena in the early hours this morning took the lead following “the test of her life” and waited patiently as the next sixteen riders did their utmost to claim gold, but it would be in vain, as she held top spot throughout and emerged the new Grade II Olympic gold medallist for the Individual Championship.

In second place, and already looking like a strong medal contender during yesterday’s team competition, Lauren Barwick (CAN) achieved the goal of a lifetime, eight years in the making… Speechless at first, this tremendous result was all the more surprising given that Maile had been unwell upon arrival in Hong Kong, and she thanked her team and all the support she had received during those few uncertain days.

Bronze was decided in the final stages as the young and determined Danish rider, Caroline Cecile Nielsen performed the penultimate test, and convincingly slotted into third place. A medal which she had only “dared dream of became a reality” following the tremendous efforts of her new coach and horse Roster’s Hatim-Tinn. 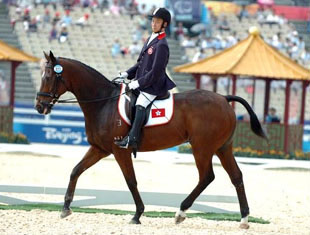 A great crowd was present, as both the Chinese and Hong Kong rider, Yulian Peng and Siu Hong Yip were centre stage for their first Paralympic performance, a moment which they will remember no matter where they place on the final scores of the day.

Britta explained during the press conference that her anger at a disappointing test during the team competition the day before gave her all the more power and concentration today, and as “new opportunities come with a new day”, she was determined to reach her potential. “Before I compete, I get a little angry and that makes me stronger and more empowered in the competition.” Her great performance and score will also go a long way to boost their final team score as will the 5th place by fellow team member Steffen Zeibig. For the third German team member competing this morning and former Paralympic medallist Angelika Trabert, the test didn’t quite go as planned, placing eighth. However, any disappointments will now soon be forgotten as they get ready for the Grade II Freestyle to be held on Wednesday…