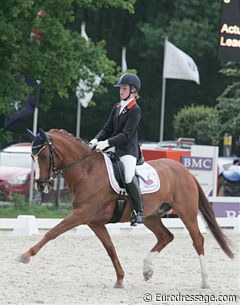 Antoinette te Riele became the 2008 Dutch Outdoor Pony Champion with her second pony Danny Boy B (by Flying Dream). Te Riele won the Finals round at the 2008 Dutch Championships (aka Hippiade) in Ermelo, The Netherlands, Saturday August 30, 2008.

The Dutch Outdoor Championships take place over two rounds. Two rings featured a qualification test from which the top ten qualified for the finals. The winners of the qualification rounds were Lars op 't Hoog and Maria van den Dungen, but in the finals Te Riele (who placed third in the qualifiers) rose to the top and won the champion's title with a 69.20% earning test.

The 14-year old Te Riele lives in Weert, The Netherlands. In July she won individual silver with Golden Girl at the 2008 European Pony Championships. "Golden Girl had already won silver. She's having a break now as we don't want to be too crazy with her," Te Riele said. "It went really well today, especially in the second test Danny Boy was responsive to my leg. I had trained for a week with my trainer Gonnelien Rothenberger [her aunt] and practised on getting a soft contact with the bit."

14-year old Maria van den Dungen became the reserve champion with her new pony Rembrandt (by Renoir). They won the qualification round with 68.90% and scored the same mark in the finals. "I've been riding this pony since March and this is only our fourth show together," Van den Dungen commented. "He's a real stallion, but once you are on him, he listens really well. I can keep on riding him till the end of my pony time and that makes me really happy. I like riding stallions, when they behave nicely."

Van den Dungen missed out on the 2008 European Pony Championships because her pony Dino P got injured only three weeks before the show. "It was a real bummer to miss out on the Europeans," Maria said. "But this show is fun too. Rembrandt is still a very young pony. My goal was to reach the finals and I hoped to capture a place in the top five. I'm very happy with the reserve champion's place."

The bronze medal went to Dutch pony team rider Anne Meulendijks on Boticelli. They scored 67.30% in the finals.

The judging at the 2008 Dutch Pony Outdoor Championships was abysmal. The three judges for the finals, Kloosterboer, Litjens, and de Bruin, totally did not agree with each other and messed up the entire ranking of the combinations. Te Riele placed first with two judges and fifth with the other. Maria van den Dungen ranked first and second with two, and judge De Bruin placed her last!! Anne Meulendijks and Boticelli placed third with two judges and second to last (9th) with De Bruin! The fourth placed combination Julia van Schaik ranked 9th at C, 7th at H and 2nd at B (De Bruin). The fifth placed pair, Klinte de Rijck, placed 8th with judge C and B, and 2nd with judges at H (Litjens). The judging was just non-sensical.

Head of the judges, judge at C Jan Enne Kloosterboer, did not comment on the weird ranking of the riders but mainly felt happy to judge at the event. "I judged the class with much pleasure. These children really know what they are doing. It wasn't about good and bad, but here it was about good and best."