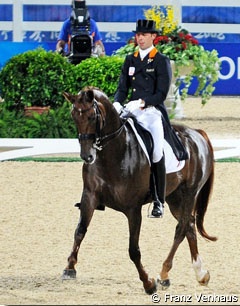 The 2008 Olympic Games in Dressage started today with the first group of riders competing in the Grand Prix, the test which counts for the team medals. Set in the gorgeous outdoor ring of the Hong Kong Jockey Club, the Grand Prix is ridden in the evening under flood lights.

Holland draw the first position to start as a nation, which means that Hans Peter Minderhoud was the first rider to go. With no longer a fourth scratch score rider on each team, each ride counts and if Holland wants to be in contention for a team gold medal, a score over 70% is necessary. Aboard Exquis Nadine (by Partout), Minderhoud rode an error free test but there were some minor imperfections here and there that tampered with the overall harmonious picture. The trot tour was very solid, with nice extensions and good crossing half passes, but the horse tends to be stiff in the back and could have swung more through the body (consequently she would have had larger overtrack in the extensions). The walk was good, both in the extension and collection). Of the three passages executed, the second one was the best in rhythm. The other two tended to be slightly uneven with a right hand leg tracking under more definitively than the left hand leg. In piaffe, the rhythm was clear, but Nadine doesn't sit. Her hind legs trail behind and even try to step backwards insteady of going under and taking the weight on the hind legs. The extended canter was really good: powerful, ground covering. The zig zag looked really good, except for when the pair made seven strides instead of the allowed six. The tempi changes posed no real problem, though here again, Nadine could have been more elastic in the back. The right pirouette was big and hasty, the left was still big but better in rhythm and impulsion. The first score given by the panel of judges (consisting of Mandi, Tornblad, Fouarge, Riexinger and Rockwell) was 69.625%.

After Nadine had left the ring she urinated almost straight away near the bit check. Minderhoud talked to Horses of the Dutch reporter Fabian Brockotter and commented on his ride "I really dislike finding excuses, but I do think the full blatter was bothering Nadine," Minderhoud said. "I made a stupid mistake in the zig zag, making seven strides instead of six, which will have cost a lot of points. I was startled when I saw that my score was below 70%".

The big nations going for a medal at this year's Olympics are Germany, The Netherlands, U.S.A, Denmark and Sweden. For Sweden Patrick Kittel came in the ring as fourth rider to go with the Westfalian licensed stallion Floresco (by Florestan). The bay stallion is gorgeous to look at but lacks power and engagement in the hind legs, which is the problem in the execution of several movements. He showed hardly any overtrack in the extended trot, lost the engagement in the passage with hindlegs that follow more than push. The tempi changes were difficult with one short change in the 2's and one double beat in the 1s. The piaffe, on the other hand, was lovely with the horse really sitting on the hindquarters. They scored 67.125%.

For Britian, Jane Gregory was the first team rider to go. Her 17-year old Danish bred Lucky Star was grinding his teeth loudly in trot. He did a good half pass right, but lost rhythm in the left one. The piaffe was lovely but were too forwards, so was the passage, but the transitions were difficult. The highlight of their test were the pirouettes. Gorgeously jumped, on the spot. Their score of 63.375 % was too low to put Britain anywhere near a medal position. Game over already with the three-riders-to-a-team rule. 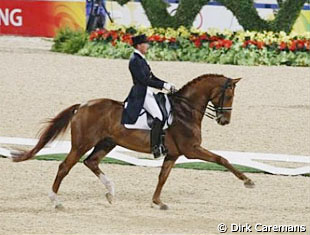 The first real head-turning pair to enter the ring was the GermanHeike Kemmer on the Hanoverian gelding Bonaparte.. And wow, what did Kemmer live up to the expectations! She put in a better performance than at the final German Olympic trial in Aachen! Bonaparte looked much more confident and less looky and tense. He was solid in the trot, gorgeous half passes and showed outstanding piaffe and passage as well as the transitions to and from. Only in the second transition from piaffe to passage, Bonaparte lost the collection. He has a clear rhythm in the piaffe, though Bonaparte did put his ears backwards a little in the first one. The walk part was very good. The two tempi's were good but could have been straighter in the body, the one tempi's were very nice. The right pirouette was flowing, the left one a bit too big. In general, it was a very smooth, controlled and relaxed ride. Noone can contest the deserved score of 72.250.

The only rider who has challenged that mark so far is the American Courtney King. Aboard Harmony's Mythilus (by Ferro) was a delight to watch. It was the first time this pair appeared in front of the big audience, only having competed in the U.S.A. at national and international events. King and Mythilus are the U.S.'s third pair, but what a strong combination they are. Beautiful trot half passes with a scopey front leg (they could have been more forward though). The extended trot lacked some overtrack but the piaffe and passage were super. Especially the piaffe was a textbook example of a horse that sits on the hindlegs, takes on the weight and stays clear in the rhythm. Gorgeous! The passage could have been a bit more uneven, with the right hind leg pushing harder than the left. The pirouettes were also outstanding, small, well jumped and nicely lifting out of the should. Great job Courtney! 70.417%

Two combinations are riding today for The Netherlands and Imke Schellekens had to score big if she wanted to keep Holland in a gold or even silver medal position! The Hanoverian mare Sunrise is a horse of highlights and lowlights. Her fortés are the lovely half passes with an enormous ability to cross and reach with her legs. Also, the mare stays nicely in position with her head, on the vertical, and the contact seems very light at all times. The piaffe is also fantastic. On the hind legs, nice in rhythm and relaxation. Both canter pirouettes were up to par. The low points are the hindlegs lagging behind and the ever swooshing tail which makes you think she'll go up in the air one day like a helicopter. Sunrise's hind legs definitely need to step under much more. The mare is a bit longer in the back, which makes it more difficult to overtrack, but she needs to move her hind legs more to the gravity point. She hardly overtracks in the extended trot and in passage, the hind legs are trailing behind, despite her moving elegantly and lightfootedly. Furthermore, the "tongue of Rotterdam" surfaced again [at the 2008 CDIO Rotterdam, Sunrise first stuck her tongue out at competition]. In the zig zag, two parts of the movement were executed with a giant piece of fleshy tongue sticking out on the left side of her mouth. This is considered a clear form of resistence. 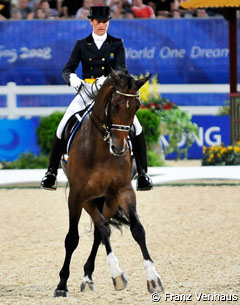 The judges were not unanymous in their scoring. Four of them were at 71%, the German judge at 68.33%. Quite a difference, but considering what has been performed by Schellekens, she can be happy to get off the hook with her overall 70.875% (And what lingers in the mind now: shall we see some Dutch judging revenge tomorrow?? At the moment, the judging seems quite solid with the five of them agreeing pretty well with what is going on in the ring).

Next top campaigner in the ring is the Swedish Tinne Vilhelmson-Silfven aboard the Danish bred Solos Carex. After the salute, the massive bay gelding breaks into canter on the centerline. Good trot extensions and half passes follow. The first passage is superb: bouncy, off the ground, even in rhythm. The piaffe tends to lose impulsion as the horse takes big steps and Carex has difficulties moving out of the piaffe into passage, taking too big steps, the canter tour is solid and the final passage on the centerline is fantastic (though it could be a bit more collected). The final piaffe at X poses a problem. Carex wants to leave too early and makes a stride forwards, his rider half halts, two more steps of piaffe follow before they proceed in the end passage. Score: 66.042% 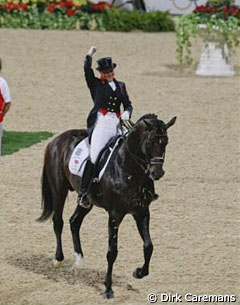 Final hot shot to go before the end of the class is British Emma Hindle aboard the Hanoverian stallion Lancet (by Wenzel). The dark bay stallion made his biggest fame four years ago at the Olympic Games in Athens under Imke Schellekens-Bartels. Four years later he returned to the most prestigious show ring in the world: the Olympic arena under British Emma Hindle. The test starts off well with huge, ground covering trot half passes. The passage is nice and even, but could be more closed in the frame with the hind legs moving under. The piaffe is clear in rhythm but ridden very safely. The extended walk is very good as ever. The second pi-pa is regular but after the transition from piaffe to passage, Lancet tended to pull the left hind leg more under than the right hind leg. The extended canter could have been more forward to the end. The tempi changes are marvellous: huge, uphill. The left pirouette started so collected that the horse lost impulsion. When Emma fixed it, the pirouette got a tiny bit too big. Final piaffe passage super. Regular, clear in rhythm, active. Lovely. "Well done," team trainer Richard Davison shouted at Emma. The score 71.125%, finally the big break Emma Hindle has been waiting for. Years of hard work paid off for a good performance at the biggest dressage event in the world!

The second group goes tomorrow. Tune into Eurodressage for live coverage of this event. Photos will be added to this article tomorrow as well.