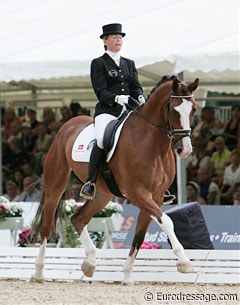 The 6-year old qualifier for the finals on Friday morning August 1, 2008, was for the horses a dance of devotion. Horse and rider tried to woo the judges and audience with their movements and training in order to obtain a ticket for the finals on Sunday. Unfortunately, the preliminary test was not a success for all.

The dance of devotion turned into a day of drama with horses unable to attain and show properly their current level of training due to unforseen circumstances.

The Danish Astrid Gemal finished fifth in the 5-year old preliminary round aboard the Danish warmblood NOH's Wizard. The lovely coloured bay gelding by White Talisman x Ragazzo is quite a heavy horse but he moves with much cadence in trot. His walk is ground covering and in canter he shows very good self carriage, even though the flying changes were not perfect. The judges scored hbim 8.4 for trot, 8.6 for walk, 7.8 for canter, 8.0 for submissiveness and 8.3 for general impression. Total : 8.22.

Blue Hors stable rider Maria Louise Andersen tied with Gemal on fifth place. Riding Blue Hors Stud's Lux Stengsvang (by Lobster x Diamond), Andersen showed outstanding training on this horse. The dark bay was very rhythmical in trot but could have showed a clearer rhythm in walk. In canter, Andersen lost the collection a bit and the horse could have been more closed in the frame. The flying changes were good though and Lux looked very confirmed for the 6-year old test. He scored 8.0 for trot, 7.4 for walk, 8.6 for canter, 8.5 for submissiveness and 8.6 for general impression. Total 8.22 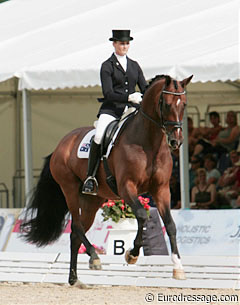 What an improvement to last year! Australian Maree Tomkinson rode a very matured Diamantina in the 6-year old test to finish seventh with 8.16. This Oldenburg mare by Diamond Hit x Campari M is a pleasure to watch. She is true eye candy with her looks. Her trot was rhythmical, impulsive, maybe even a bit too much forward as it lead to a loss of rhythm. In the extended trot she really opened the frame and lengthened her strides. In canter she covered much ground. Her first flying change was good, the second a bit short. Diamantina was nicely on the vertical at all times. She scored 7.8 for trot, 8.0 for walk, 8.3 for canter, 8.2 for submissiveness and 8.5 for general impression. Well done!!

Last year's fourth placed 5-year old in the finals, Polka Hit Nexen, finished 8th in the 6-year old preliminary round this year. Under Danish Dorthe Sjobeck Hoeck, this Danish bred mare by Sandro Hit x Templewind xx showed little gain in muscle after one year, but looked more solid and confident in her work. The trot was lightfooted, engaged with good under step, but in the traversal movements she could cross her legs more. The walk was good. In canter, the mare was held back. She could have jumped more over the back and covered more ground. There lacked some swing in the canter and the judges noticed that too. She scored 8.3 for trot, 8.0 for walk, 7.7 for canter, 8.0 for submission and 8.3 for general impression. Total 8.06

Last year's 5-year old bronze medallist now finished 9th. Under the French Jessica Michel, the Oldenburg mare by Caprimond x Donnerhall showed a super cadenced trot which was lightfooted and rhythmical. The traversal movements were lovely but she tended to tilt her head in them. The extendad walk was excellent and the canter work good. The flying changes worked, but the mare moaned while doing them because she lacks some real looseness in the back. Noble Dream is an elegant mover, but her back is stiff and could be swinging more over the back. She scored 8.0 for trot, 8.3 for walk, 7.9 for canter, and 8.0 for submission and general impression. Total: 8.04 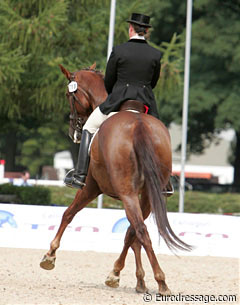 If there is one real "Happy Athlete" at the show it is Mareike Mondrowski's Hanoverian mare Waioni (by Waikiki x Fabriano). The chestnut mare is a real horse and not a competition horse. On Thursday morning, she was caught from the field where she stands every day with five other mates, was loaded in the trailer and brough to Verden for the vet check. This amateur rider qualified for the World Championships in Warendorf astonishing the professionals with her good riding. The trot had great self carriage and in the traversal movements the horse really crossed its legs, as pictured, but in canter he could have been more supple in the back and in the gait in general. Mondrowski scored 7.96 in total, good for a 10th place.

It wasn't a good day for the licensed stallions in Verden. With lots of classes going on, including the Hanoverian young horse championship for mares and geldings. With horses constantly passing by the World Championship ring, there was a lot of calling between horses. Doug and Louise Leatherdale's Hanoverian stallion Damsey (by Dressage Royal x Ritual) was one of them got distracted by the surroundings. He was whinnying in the trot and spooked at H. In canter he got tense and had difficulties with the flying changes. But the horse also showed great things, such as his walk, which did not loose its quality of rhythm, and the trot which stayed very cadenced. He scored 7.16 and finished 31st.

The same went for Fiona and Penny Bigwood's massive Hanoverian stallion Dramatic (by Don Frederico x Weltmeyer). He was spooky and resistent, but rider Jana Freund kept her cool and tried to get the best out of the black stallion. The trot was impressive, with fantastic engagement and much shoulder freedom. The extended walk had super overtrack but in canter, the horse was fixed in the back and was unable to swing. But the horse beams with FEI potential and all three gaits are world class when the horse is relaxed. He scored 7.0 and finished 35th. 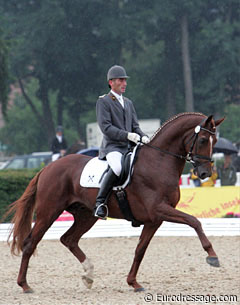 One ball of stress and distraction was the Celle State Stud stallion Londontime (by Londonderry x Weltmeyer). Rider Wolfhard Witte had his hands full managing this unfocused stallion. He was whinnying throughout the ride and twice broke into canter. Londontime hardly showed a walk. It wasn't there day and they will get a chance to redeem themselves in the consolation finals. They scored 8.0 for trot, 6.0 for walk, 7.2 for canter, 6.2 for submission, 6.8 for general impression and 6.84 overall.

The horse that was giving its rider the hardest time of all was the Dutch warmblood stallion Valentino S (by OO Seven x Contango). Its resistent performance was the talk of the town after the class. The horse refused to enter the ring and was rearing consistently and dangerously at A. Rider and owner Isabelle van Zaanen finally got him going but the only thing the horse showed was on out-of-this-world trot with an angulation of the front leg of more than 90°. It was as if Valentino was not touching the ground with his legs.. he was flying!!! Of course there was no walk and the galop was totally tense. The scores were equally impressive, on the negative side: 7.2 for trot, 1.0 for walk, 6.0 for canter, 3.0 for submission, 4.0 for general impression. Total score 4.24. 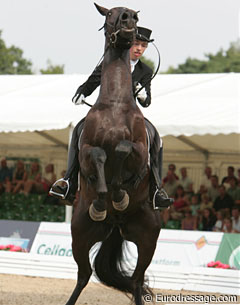 One reason why the 6-year olds were so tense could have been that the organization cancelled the riders' opportunity to train in the main ring the day before. Because the Hanoverian Young Horse Championships were taking place in the same ring as the World Championships and their classes took longer than expected. The warm up in the main ring for the 6-years olds on Thursday evening was cancelled and the riders only got the chance to ride their horse in that ring prior to the test at 6 AM on Friday morning.

Furthermore, it makes one wonder why the national selection committees always focus on selection stallions, while they have proven to be the hardest rides at the Championships. One could equally select mares and geldings which have the same qualities and maybe less complex temperaments.