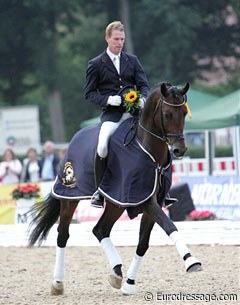 The Westfalian licensing reserve champion Rock Forever won the 5-year old consolation finals on Friday afternoon at the 2008 World Championships for Young Dressage Horses in Verden, Germany, August 1, 2008. Under Olivier Oelrich, Rock Forever showed the movement potential he had and kept his cool this time

, winning the class and earning a ticket to the finals on Saturday. The second and third ranked horse, Welt All and In Vita, also qualified for the finals.

Rock Forever (by Rockwell x Landstreicher) had outstanding gaits with lovely spring and elasticity in trot and canter. The walk is ground covering and active. When it concerns the quality of the paces, Rock Forever earned his place in front's victory but the stallion's victory left a sour impression. While yesterday, the bay was spooky on several occasions and evaded the rider's pressure of the leg by taking off for brief instances, Rock Forever did not get that chance in the consolation finals. He entered the ring soaked in sweat with with foam bubbling between his legs. Even though his gaits were highly expressive, it looked like the horse had been ridden to death in the warm up. In the transitions from canter to walk and in the end halt, for instance, he completely fell shut. Most transitions were abrupt and the rider was constantly giving aids with the hands and spurs, which were used roughly and visibly. It wasn't a pretty sight and unfortunate that the best in this horse came out under such unfortunate circumstances. The judges scored Rock Forever 9.0 for trot, 8.2 for walk, 8.5 for canter, 8.2 for submissiveness and 8.8 for general impression. Overall score was 8.54. 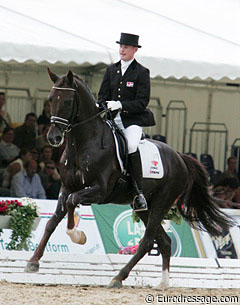 Riding deservedly to second place was the young Dutch rider Theo Hanzon on the KWPN stallion Welt All (by Diamond Hit x Negro). Owned by Joop van Uytert, Welt All was much better in the consolation round appearing to be a different horse. The trot was more active and off the ground, the canter showed better self carriage and the contact with the bit was more constant even though the horse occasionally put his head up too high, making him tight in the neck. The judges stated they were impressed with Welt All's trot which was "active and expressive in the hindleg" but that the walk should have showed "more ground covering." They scored him 8.6 for trot, 7.2 for walk, 8.5 for canter, 8.2 for submissiveness, and 8.4 for general impression. Overall 8.18.

Placed third was the Luxembourg Pascale Sax on the Trakehner mare In Vita. Sax and In Vita had a lovely ride in the first round, but the horse constantly stuck out its tongue on the side of its mout which was heavily penalized in the submission. In the consolation finals, however, it seemed as if In Vita had swallowed it and there was no tongue dangling on the side. The Buddenbrock x Kennedy has elegant paces in which the legs come to full stretching potential in the lengthenings. She moves with much lightfootedness in trot and canter and is endowed with a lovely walk. The judges awareded her ride with 8.18. 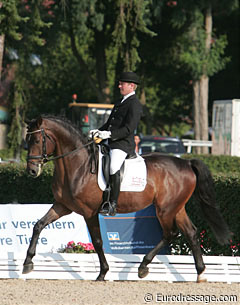 It must be horrible to place fourth in the consolation finals and miss out on the big finals just by a fraction of points. This year it happened to Jim Rasmussen. The Dane rode Ullerups Müller (by Munchhausen x Ibikus) to an 8.08 score and slotted in fourth. He was closely followed in the ranking by the American Jennifer Hoffmann on the Westfalian licensed stallion Rubinio B (by Rubin Royal x Florestan) with 8.04 points. The French Jessica Michel and the elegant Hanoverian mare Dame de Hus (by Don Frederico x Castro) placed 6th on 8.04 and was the last horse in the ranking to score above 8.0. In the first round, Dame de Hus was not through on the bit and evaded the contact regularly. In the consolation finals the contact was much better but still not perfect. The head was sometimes tilted and the mouth a bit open. Michel held back in really riding the best paces out of Xavier Marie's mare. The chestnut is extremely elastic and supple, but did not come to full expression in the trot extensions and in the canter work, where the strides should have been lengthened more. 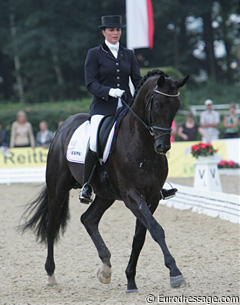 Holland had set its hopes on qualifying a second horse for the finals, the much praised KWPN licensed stallion Westpoint (by Jazz x Michelangelo). Highly acclaimed in The Netherlands at the KWPN dressage shows, Westpoint failed to impress at the 2008 World Championships for Young Dressage Horses in Verden. In the first round, the horse was incredibly tight in the neck and did not show any stretching in his gaits but kept the same high knee action in the collected and extended work instead of lengthening the stride. The horse also avoids using his back and seems to be moving active with the legs, but not through the body. In the consolation round, rider Emmelie Scholtens presented Westpoint in a much better frame. The connection with the bit was softer and the horse's head was on the vertical and no longer tight in the neck. There was more 'peace' in the ride. The judges however, still did not find the ride appealing. They commented on the horse's lack of trust for the bit and on him having not enough swing in the body and movement over the back. In canter the horse failed at collection, despite his activity and clear 3-beat rhythm. The commentary of the judges was quite correct, but they did stay too conservative in their points as Westpoint's consolation test was far better than the preliminary test and the improvement in the score (7.3 compared to the 7.16) did not reflect that well enough. Westpoint did not show the quality in training and movements to be a finallist, but could have finished higher than 23rd in the consolation test.