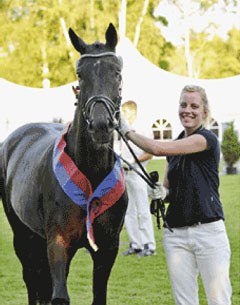 moved herself into the champion's circle after a tough finals against 15 other selected mares for the Brilliantring.

Weihegold already impressed the judges in the mare performance test in Vechta, where she scored high notes for her gaits and rideability. She scored 8,1 overall with a 9 for trot, 8,5 for canter and 8 for walk. In Rastede, she was also the favourite for the champion's title.

"Weihegold embodies the almost ideal characteristics of a riding horse. She is incredibly beautiful and impressed us most today in walk and trot," said Oldenburg breeding director Dr. Wolfgang Schulze-Schleppinghoff.