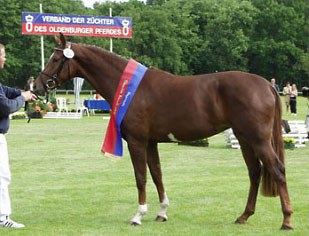 Fabina, herself a full sister to Oldenburg Top Sire Don Schufro, has been chosen to become Champion Mare 2003 at the Oldenburg Elite Mare Show am June 14th, 2003 in Rastede.

The 3-year-old chestnut filly has been bred by Günter Bastian, Bartgeheide, and belongs to the Blue Hors Stud in Randboel, Denmark.

Selected from a large field of 99 qualified fillies, 19 finally gathered in the illustrous Brillantring. Beside the Champion there were three more daughters of dressage sire Donnerhall and three descended from Donnerhall's son De Niro, like the Reserve Champion Mare Uniqua bred by Helmut Kleen, Petersfehn. There were many offspring by dressage sires like Sandro Hit, Wolkentanz II, Florestan I, Lord Sinclair, Rubinstein and Rohdiamant, but also show jumping sires like I need you, Pilox, Lordanos and Argentinus were represented, like the thoroughbreds Noble Roi xx and Rivero xx, who had half-breds competing successfully.

Jan Pedersen, President of the Danish Warmblood Society and President of the WBFSH (World Breeding Federation for Sport Horses), did the comment on the event and congratulated Oldenburg not only for their lovely Champion Mare whose win was very convincing, but also stated that Oldenburg, considering the quality of the whole show, is heading into the right direction for a bright future.