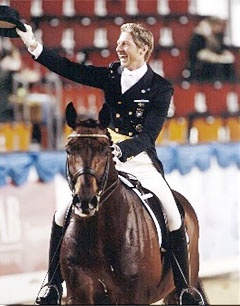 The Swedish Equestrian Federation has released the names of the riders and horses that will represent Sweden at the 2008 Olympic Games in Hong Kong. The Swedish Olympic team will test its potential in its pre-Olympic run at the CDIO Aachen this week.

The reserve rider is Emma Karlsson on Faradera (by Florestan).

Chef d'Equipe Elisabet Lundholm will be heading the team at her last official event before she passing on her chef function to Bo Jena.