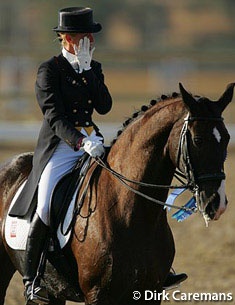 Besides the four team horses, three more will stay in Wilco van Grunsven's quarantaine stable before lift-of to Hong Kong.

Four years ago, two of the Dutch team horses -- Edward Gal's Lingh and Antoinette Falandt's Jarwo -- got injured just prior to the 2004 Olympic Games in Athens and had to be replaced last minute by reserves. Sanders does not want to run the risk that no reserve horses are available. Quarantaine for the Dutch horses starts on 17th July 2008. They fly to Hong Kong on 25th July 2008 and return from the Games on 23rd August 2008.