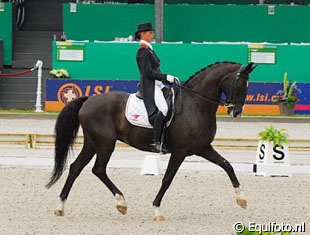 Anky van Grunsven won the final Dutch Olympic Selection trial at the 2008 CDIO Rotterdam, The Netherlands, on Thursday June 19, 2008. Aboard her Hanoverian gelding Salinero (by Salieri x Lungau) she scored 75% and won the Grand Prix, the test which counted as Dutch Olympic qualification class.

Anky showed Salinero in a very relaxed form, but her ride was not fault free. There was no immobile halt as the gelding reached out with left front leg. The trot half passes were gorgeous but he had his mouth open. She second and last extended trot could have had more overtrack, but in general the trot tour showed great balance and power. The ride contained the best walk even seen from Salinero with two hooves overtrack and in relaxation. The first two passages were not always even behind, with the left hind leg pulling more than the right but the piaffe was superb. The walk-passage transition was difficult with a double beat behind. The canter work was high quality with a nice extended canter and a gorgeous pirouette right, which was followed by a small imperfection in flying change at X. The two tempi's were good, but the one tempi's were croupe high and showed a tail swooshing quite heavily. The final piaff-passage was nice, but the horse moved again as soon as Anky saluted in the end halt.

"I wasn't totally happy with my ride, there were too many tiny mistakes, but also some very good things like the left pirouette," Anky admitted. "He went really well, but the test was not error free." 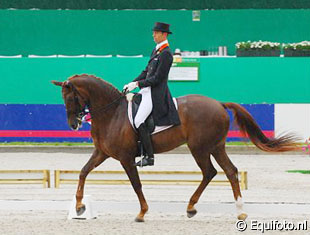 Hans-Peter Minderhoud and the Dutch warmblood mare Nadine (by Partout) exceeded all expectations and finished second in the Grand Prix, ahead of second team rider Imke Schellekens-Bartels on Sunrise. With his high placing and 71.917% score, he secured his place on the Dutch Olympic dressage team, even though Dutch chef d'equipe Mariette Sanders and team trainer Sjef Jansen announce the team at the end of the CDIO Rotterdam (on Sunday).

Minderhoud got much out of his mare even though his preparations weren't ideal as Nadine was bothered by an udder infection last week. To Eurodressage, Minderhoud told that his mare was going excellent. "She's going like spear at the moment, so we're really going for it," he said.

Imke Schellekens-Bartels and the Hanoverian mare Sunrise (by Singular Joter) landed a third place on 71.83% due to a few mistakes in their ride. While travelling round the arena before they entered, Sunrise threw her tongue over the bit and stuck it out. It only lasted a second and Imke was able to commence her ride with nice contact with the bit. The trot tour was nice but safely ridden, which caused some lack of overtrack in the extended trot. The half passes were lovely but the tail was rotating incessantly. Same for the passage, lovely balance and lightness but one could expect more push from behind. The extended walk was outstanding. In the transition from piaffe to passage Sunrise broke into canter. The two tempi's were delightful, but the one tempi's could have been divided better on the diagonal. Imke was already finished riding them 5 meters after X. Right before the pirouette to right, Sunrise again threw her tongue over the bit and stuck it out. The tongue was gone after the pirouette and the one to the left was fine. 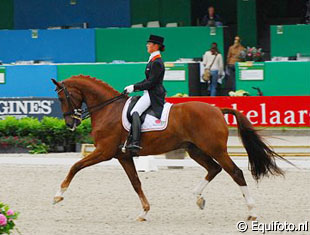 Dutch fourth team rider Adelinde Cornelissen made no major mistakes and finished fourth with 70.750% but the ride could have been more harmonious. The easy going flow was not there and the arena seemed to have made too big an impression on the timid looking Parzival (by Jazz).

In the nation's cup, Holland made a winning move but none of the three top rides were fault-free. "I have mixed feelings about the performances today," chef d'equipe Mariette Sanders said. "None of them had GREAT riders and Sjef will have his hands full the upcoming weeks." 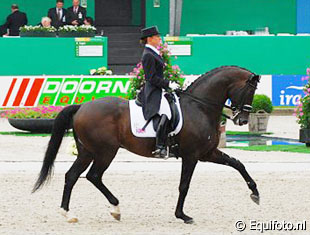 "This is place which gives much hope for Hong Kong," British chef d'equipe Richard Davison said. "We'll be working hard at keeping that spot."

Hans van Belle and Anouska van Dommele of www.equifoto.nl are upcoming horse photographers and shared a selection of photos with us taken at the 2008 CDIO Rotterdam, the final Dutch Olympic selection trial. As expected, Anky van Grunsven and Salinero won the show.