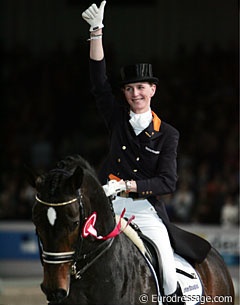 The battle is heating up between the Dutch Olympic candidates as the selection process continues this weekend at Outdoor Gelderland in De Steeg, The Netherlands. Something earth shattering has to happen for Anky van Grunsven and Imke Schellekens-Bartels

to lose their spots on the team, but the fight is definitely on for the third spot which is most likely going to be between Hans Peter Minderhoud and Adelinde Cornelissen.

Minderhoud and the chestnut Trakehner bred mare Nadine (by Partout) were members of the gold medal winning team at the 2007 European Dressage Championships in Turin, Italy, but their score average has been overclassed this year by Adelinde Cornelissen on the chestnut Dutch warmblood gelding Parzival (by Jazz). Cornelissen became the 2008 Dutch Indoor and Outdoor Dressage Champion and has been consistently scoring round 72-73% in the Grand Prix.

Three more riders from the Dutch Olympic long list will not participate in the Olympic qualifier at De Steeg. Kirsten Beckers' keur stallion Broere Jazz (by Cocktail) is not fit, while Marlies van Baalen's Kigali (by Wolfgang) has a bruised hoof. Stephanie Peters cancelled her entry with Jeff because of a minor injury, but the pair is expected to show again at the final qualifier in Rotterdam.

"It's a pity that Stephanie has to withdrawn. She was not only in my eyes a clear candidate for the team. During the training session last week, Jeff sustained a minor injury and is now behind on his training schedule," Dutch chef d'equipe Mariette Sanders commented.

Sanders will of course look at all Olympic long listed riders during the trial in De Steeg. "The performance in the Grand Prix is what counts for team selection. The team medals are distributed in that test and we have to be able to win gold in it," Sanders said. "Taking the performances of the last few months into consideration, Peters, Cornelissen and Minderhoud have the biggest chance for a team place, but I also want to watch riders such as Alex van Silfhout and Laurens van Lieren perform. None of the long listed riders have been scratched off the list."