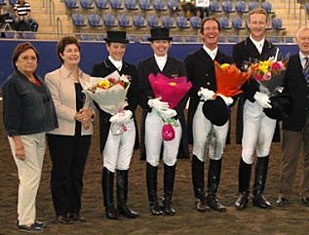 After rain forced a change of arenas and delayed the start of the competition, the Australian representatives at the Regional Olympic Dressage Team Assessment at the Sydney International Equestrian Centre scored well to go into the lead.

The Australian team score of 196.167 put Australia in the lead, in front of the Japanese, who had a team score of 194.792. New Zealand still has three riders to complete the assessment in Palmerston North next Thursday.

Brett Parbery and Victory Salute, owned by Carolyn Lieutenant, were the stars of the day finishing as Australia’s highest placed combination. “I really felt the tension in the lead-up to this event, not so much today but in the weeks before” commented Parbery. “The Japanese set a really high standard, they have invested a lot of time and money into this. They have some really good horses and riders so it was great to beat their Team score today”

Parbery was unsure how his test would score when he left the competition arena. “I finished the test and thought I had blown it” said Parbery, but the judges thought otherwise, scoring him 66.917%.

Heath Ryan was the first rider of the day and did not have the best morning. Firstly, Heath had to hurriedly put a shoe on Clyde Wunderwald’s Greenoaks Dundee after he pulled one off walking out of his stable, and then Heath was disadvantaged by the change of start time as he was already warming up when the 1-hour delay was announced. Ryan was disappointed with his test but said the distractions of the morning had nothing to do with it. “None of that was the reason that my test was not as good as I hoped” said Ryan. “My horse felt good but I made mistakes, which is not like me. I was pushing for the best test. I usually gun for a big test and typically I get away with it but today I had little mistakes that interfered with the score.” 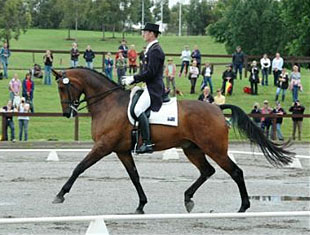 Ryan reflected on his training in preparation for this competition, “I have been training the horse with a view to producing a higher level of power than ever before, that means a lot of gymnastic exercises, really going to the edge” said Ryan, “But you still have to be able to put the test together on the day. If I got to ride this test again next week I would probably run through the test a few more times in training.”

Rozzie Ryan was pleased with Susan Duddy’s Donna Carrera. “She felt good, if I could just get her happier in the piaffe her score would really improve” said Rozzie. “She is a real woman, she likes to have a discussion on everything but today she felt pretty good.”

With the Olympic Team place now guaranteed for an Australian Team the riders can breath a sigh of relief. “We are really thrilled” said Rozzie Ryan, “We achieved what we set out to do.”

One team position at the Olympic Games is still available for this region. The battle is now between New Zealand and Japan. The New Zealand Team will compete this Thursday, 7 January, at Palmerston North. Their score will determine if they can out-class Japan for the right to compete at the 2008 Olympic Games.