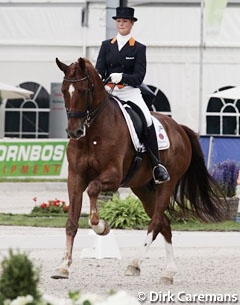 At an official press conference in Arnheim 255 days before the Olympic Games in Hong Kong, Dutch dressage chef d'equipe announced that she has assembled an A-team of nine riders from which the Dutch Olympic team will be selected.

Mariette Sanders explained that she was striving for clarity, definitiveness and transparence: "We selected the riders for this A-team based on their performances the past few months. This is clarity. Definitiveness implies that all riders will train with Sjef Janssen a few times a month. Transparence will be achieved through two clear observation and selection trials. Those take place at the Outdoor Gelderland and CHIO Rotterdam competitions. All riders will show at these competitions and many judges who will be judging at the Olympics in China will be present at these shows."

The Dutch Olympic Federation will also help the riders to be fit for the weather conditions in China. The riders will be coached by Tjeerd De Vries (physician NOC*NSF) and Ruud Jacobs (physiotherapist) who have created individual fitness programs for each rider. Mental coaches as well as nutritionists are at the disposal of the riders. Performance physiologist Eric van Breda will assist in stimulating the fitness of the horses.

Only three riders and one reserve will be able to qualify for the team that competes at the 2008 Olympic Games. Holland won its first team gold medal this year at the 2007 European Dressage Championships and will go all the way to repeat this feat in Hong Kong.