Jan Brink and Catharina Svensson to Be Married 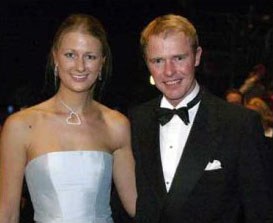 at the Trollenas castle in Eslov, Sweden. 130 guests are invited to the wedding.

The 46-year old Brink first met Svensson two years ago and last New Year's eve Brink proposed to her on skiing holiday in Verbier, Switzerland. Both will get married for the first time.

"We fit well together. We have the same philosophy on life and we think alike, even though there is an age difference," Brink told the newspaper Norra Skane. "I want to start a family and Catharina and I both want children."

Svensson is originally from Copenhagen, Denmark, and carries dual citizenship (Sweden - Denmark). She is a lawyer by profession but also had a big modelling career. She was the winner of the first Miss Earth competition in 2001, beating several Miss World finallists. She works in Copenhagen but will permanently move to Sweden after the wedding.