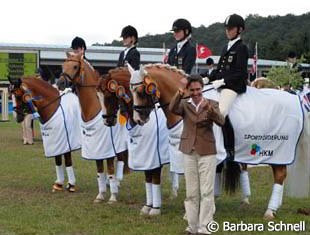 In keeping with the FEI rules and procedures on pony measurement, effective as of 1 January 2007, all ponies entered to compete in the 2007 FEI European Pony Championship were measured on site before competing.

Measurement was timetabled on 17 July and ponies were presented by nation and by discipline. Each pony was identified against its FEI passport and subsequently measured independently by each of the two FEI appointed measuring veterinarians present.

Wooden measuring sticks shod with metal and fitted with three bubbles were used and measurement was carried out in a single box located in a permanent stable building.

A total of 148 ponies were presented and measured. In the case of their being a difference in the two heights recorded, the lower height was taken into account. All Dressage and Eventing ponies measured in. One Jumping pony measured out measuring over height by both vets.

The removal of the requirement for measuring certificates and the introduction of new rules on pony measurement has had a positive impact in a relatively short space of time.

While we may all take encouragement from the progress made to date, it is imperative nonetheless not to ignore the fact that the 2cm tolerance has been used to varying degrees by the majority of NFs.

During this first application of the procedures with sanctions it has come to light that some points in our rules require further specific detailing, the most urgent of these being shoeing. It was clear that some NFs presented their ponies in very thin shoes which in some cases were changed for competition. This is an issue that needs further discussion and NFs are asked to give their opinions as to whether or not the rules should forbid this practice.

The further question as to whether the 2cm tolerance in place at present be phased out slowly or at an agreed date in the not too distant future or whether an agreed lesser tolerance ought to permanently replace it is also a topic on which the FEI would like to have the input of the National Federations. Our combined efforts to ensure that the future of the pony rider’s circuit be played out on a healthy and even playing field will be ongoing.