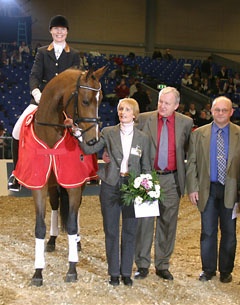 The 2007 Danish Warmblood Stallion Licensing in Herning is a colourful show with an immense exhibition area with everything horse people dream of.

Besides the stallion licensing and the spectacular gala shows, this multi-event also provides popular evening shows like clinics and training demonstrations. Since the first Herning show in 1980 the championship for 5-year old riding horses has attracted the attention of both riders, breeders, and dealers.

This year's superstar was the incredibly beautiful Polka Hit Nexen by Sandro Hit x Temple Wind XX. This ultra refined bay mare stands out as a very sensitive, yet highly rideable and not least easily collectable young mare with high quality basic paces of which the canter is her highlight. Polka Hit appears like a thoroughbred with the gaits of a warmblood. Her steady rider Dorthe Hoeck was very pleased with the victory which she considers to be the warm-up for the World Championships in Verden later this year.

Already as a young foal Polka Hit was sold in private for a considerably high price. As a three year old she passed her riding test with top scores and was awarded with the gold medal at Danish Warmblood Elite Mare Show. Shortly hereafter she was purchased - once again fetching a remarkable price - by her current owners, Berit and Louis Nielsen.

Presented by another rider in 2006 at the qualifications for Herning, Polka Hit actually did not meet the requirements to qualify. Only when another qualified horse fell sick Polka Hit got the chance to go to Herning and prove her capacity.

This year in Herning Polka Hit probably did show the full potential of her basic gaits for which she obtained 3 x 8,5. Furthermore, scoring 10,0 and 9,5 for rideability and 9,5 and 9,0 for capacity put the stunning Sandro Hit daughter in first place.

The Danish Warmblood stallion of pure Trakehner lines, Blue Hors Hertug, took a clear position as the dominating sire in the dressage championship in Herning this year with his offspring placing 2nd, 3rd, 8th etc.