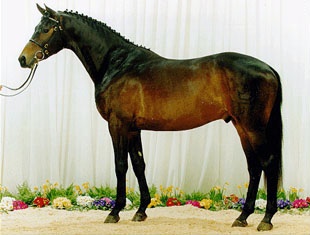 He received an exclusive painting of his stallion painted by Thomas Bach Jensen.

Blue Hors Hertug was born in 1996 at Stuhr's stable in Haarby, Denmark, and he is currently owned by Erik Vestergaard from Risskov, Denmark. Blue Hors Hertug is by Schwadroneur out of Hellas (by Donauwind). His bloodlines represent four generations of Grand Prix dressage horses.

Hertug's value for the Danish breeding market is tremendously. Having produced many outstanding young dressage horses, he was proclaimed Elite Stallion in 2004. Famous offspring are Andreas Helgstrand's Hoergaard Hustler and the black mare Tredlegards Shantiana. Hertug had four offspring on the Danish long list for the 2006 World Young Horse Championships and Shantiana placed fourth in the finals at the World Championships in Verden.

To this date, Blue Hors Hertug is the only horse in Denmark that won the Danish Young Dressage Horse Championships as a four, five and six-year old. He has always stood up for stud at Blue Hors Stud in Ranboel, Denmark, before he got sold.