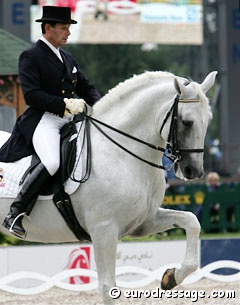 It is official, Rafael Soto's Andalusian stallion Invasor has been retired. The 17-year old grey stallion was retired in a public ceremony at the 2006 SICAB, the National Breed Championships of the Pure Spanish Horse in Seville, Spain, the last week of November 2006.

For more than a decade, Invasor was the anchor of the Spanish dressage team together with Beatriz Ferrer-Salat's Beauvalais.

Rafael Soto Andrade is the head trainer of the Spanish Riding School in Jerez de la Frontera, Spain, and aboard Invasor he participated in three Olympic Games: Atlanta 1996, Sydney 2000 and Athens 2004. They were also the second best performing Spanish pair at the World Equestrian Games in Rome (1998), Jerez de la Frontera (2002) and Aachen (2006). With Invasor, he showed at four European Championships. He achieved his best ranking at the 2002 World Equestrian Games in Spain, where he finished sixth individually. 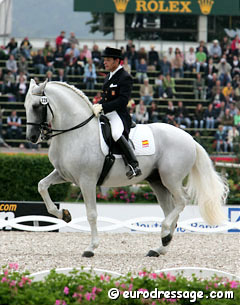 Invasor is a 1989 born PRE stallion by Panadero x Valeroso VII and is owned by the Real Escuela de Jerez. At seven years old, he was the youngest horse competing at the 1996 Atlanta Olympics.

At the end of his show career, Invasor suffered much from hoof problems and was unable to compete regularly. Nevertheless, when sound, he was often called to duty because of his vital medal winning function for the Spanish Dressage Team. Invasor is a licensed breeding stallion and will enjoy his retirement at the stud farm in Jerez.